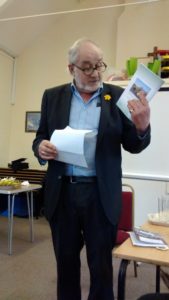 It was held in the church hall, Witchford. Speakers included Dominic O’Sullivan talking about poetry, Rosemary Westwell speaking about copyediting and why we need a copy editor, and Sylvie Short spoke about novel writing. Then Roger Rix entertained us with details of his regular correspondence about copyright in the Times Literary Supplement, Mary McGuire described how to be inspired by the mundane and Hayley Humphrey presented a writing workshop about using your surroundings for inspiration. The audience adjourned to St Andrew’s Church to follow up on Hayley’s advice and spent some time in the church practising their skills as writers. The afternoon of talks ended with a presentation by the deputy mayor of Ely, Mike Rouse, who spoke about ‘Dew speak Fen?’ He then gave out the prizes to the winners of the short story competition.

The short stories had to include the words ‘and so it was’ or could be inspired by history. The stories were judged anonymously by Jackie Tyler and Brenda Mead.

The winners were as follows:

Second ’The man on the bus’  by Sylvie Short

‘Portrait of a Soldier’ by Rosemary Evison,

‘The Boot was on the Right Foot’ by Tessa Seaman

‘The Parcel’ by Pat Rissen

I’m guessing that my first day at Cambridge University was a lot like my first day at primary school; I have no recollection of the latter yet can remember the former in excruciating detail.  I was nervous, fathoms out of my depth: I’d laughed when my careers adviser had first suggested applying to Cambridge.  People from the Fens, people like me, with older brothers who are car mechanics and plumbers… didn’t they work at the university, not study there?

Posh people all around me at the Freshers’ party, most of them called Tristan or Piers or something.  I’d already made an idiot of myself today, dropping a cup of tea down my academic robe whilst trying to engage a don in small talk.  But at least it took his mind off what I was actually saying.

A sense of place: that’s what Fenlanders have, what we need.  And I sensed my place wasn’t Cambridge, not yet anyway.  It was going to take a lot of getting used to.  I cringed in my M&S frock, eyeing all the beautiful people in their Miu Mius and Louboutins: their outfits cost more than my parents spent on their car.

The other students were discussing travel.  “The Grand Canyon last year was just awesome.  I cried when I flew over it.”

“Oh, but the Great Barrier Reef had far more of an effect on me.”  The beautiful person noticed me.  “And what about you, Josie?”

“Well… I loved the Lake District,” I managed.  I didn’t dare say that I had never left England.  Thankfully, the conversation moved on and I extricated myself to fetch a sherry and look for someone who wasn’t called Rupert.

Imagine my relief when I heard the long vowel sounds of a fellow Fenlander, chatting to the staff behind the drinks table.  I gravitated towards what I knew.  Social magnetism, I think it’s called.  He passed me a glass of sherry.

“So, which bit of the Fens are you from?” I asked him.

“Upwood, near Huntingdon.”  He paused, and then – like all Fenlanders do – he qualified it: “My family’s been there for generations.  You?”

“Deeping St. James.  I’ve lived there all my life, although my parents are from Kent.”

Such an awesomely Fenlandy quip made me feel at ease.  I chuckled for the first time all day.  And while we were laughing about the Fens, and talking about favourite walks, a couple of other students joined us, and then a couple more.  Once you meet like-minded people, an august institution like Cambridge isn’t scary after all.

And so it was that I ended up marrying that guy from the Fens.

‘The Man on the Bus’ by Sylvie Short

Poppy glanced across the aisle just as the bus jolted and the carrier bag fell open. The Crown Jewels had been so utterly fabulous that she was now seeing one of the crowns in a carrier bag on the seat of a bus.

She looked again and the man smiled.

“Do you want to have a closer look? I bought it from Hamleys for my daughter; she’s about the same age as you.”

Poppy knew she shouldn’t talk to strangers but she couldn’t look away, mesmerised by the beauty of the crown as it emerged from the carrier bag. It was breath-taking – diamonds, pearls and sapphires sparkling in the light around deep purple velvet.

“Look, they’ve even put the Stuart Sapphire at the back; it’s good, isn’t it? A perfect copy of the real thing. Amazing what they can do these days. Do you think my daughter will like it?”

Poppy swallowed hard; they were stolen once – the Crown Jewels – by someone called Blood and his cronies. She’d read about it…rammed a piece of wood into the keeper’s mouth and then stabbed him because he wouldn’t stop struggling. Hit him on the head too. She looked again at the man who was holding the crown, a piece of tissue paper round the bottom so his fingers weren’t touching the snow white fur.

“You can hold it if you like…feel the weight; they’ve made it heavy just like the real thing. My daughter’s playing a Queen in our local pageant next year. I hope it’s not too heavy for her. See what you think.”

Poppy took the crown from the man and balanced it carefully, holding the tissue, but letting her thumb gently brush against the fur – so soft – and yes, it certainly was heavy.

“I’m sure she’ll be able to manage as long as she doesn’t have to wear it for too long.”

She looked again at the jewels – amazing – but then she had often thought it was impossible to tell imitation stones from the real thing.

There were only a few other people on the bus and no-one paid any attention as the man put the crown back into the carrier bag, smiled and said goodbye. What a good job security is so tight in the Jewel House these days, Poppy thought, not like in Thomas Blood’s day when people were actually allowed to touch the precious objects.

‘A security van carrying the Imperial State Crown to Buckingham Palace in preparation for Her Majesty to wear at the State Opening of Parliament was hijacked at midday yesterday….’

“OMG…” Stunned, Poppy stared in disbelief at the headline in her dad’s paper.

At the rear entrance of Buckingham Palace the man on the bus handed over the carrier bag.

Both men laughed as the small metal gate shut and they went their separate ways.

Tea sloshed down Jerry’s arm as he caught his elbow. He sighed and peered round the offending obstruction at his dozing father whose waning memories made him even more of stranger than he was in Jerry’s youth. “Can’t we get rid of some of these?” he asked, placing the tea on the table before pointing out the plethora of cardboard boxes.

His dad stirred. “No, you’ll want to look through them some day.”

“You’re going to leave me to sort them out on my own, aren’t you?”

And so it was. He passed with the mountain of boxes untouched.

Days after the funeral, once he got over the sadness of the silent house, Jerry grabbed a box and tore off the yellowed tape. Inside was a set of plastic beakers, each featuring a Kellogg’s mascot, Tony the Tiger scratched and faded from overuse, but Snap, Crackle and Pop in impeccable condition; cityscape paperweights from places he’d not known that his father had visited–Seattle, Seoul, Sydney; and plastic parts of a glow-in-the-dark 3D model of a skeleton, collected from a magazine for countless issues. Useless junk.

Jerry carried the box to his car, frustrated that it had shed no light on his father’s life. As he dropped the box into the boot he spotted a note taped to one side:

Who were these people? Had his dad taken another family’s junk as some kind of sick joke? He hadn’t been the best father–the months at sea, the forgotten birthdays, the rumours of prison–but he’d never struck Jerry as a malicious man. Puzzled, Jerry continued to dig through boxes, all similarly labelled with anecdotes about Brian, Jenny and Eleanor. Towards the bottom of the second pile, Jerry finally found something he recognised: a stack of homemade Father’s Day cards decorated with felt-tip drawings of footballers, improving over the years until he stopped making them. Further down, he found a stack of cards, store-bought, with love from Brian, Jenny and Eleanor scrawled inside. The last was a photo-card, pictures he assumed were those kids on the front. He opened it, expecting another banal message, but gasped at the inner picture: his dad with those three kids, Love you, Dad written inside.

Frantic, he tore through the boxes, looking for confirmation of his fears.

The evidence built: a best Dad photo mug, family photographs that weren’t his family, unknown footprints in plaster of Paris. It all made sense–the months spent on cruise ships, the forgotten birthdays, the rumours of prison.

But why had he been left with these memories of this other life? Where were Brian, Jenny and Eleanor in his dying days? Was he the lie or were they? He scanned the room, estimating the number of boxes and the time required to search them all. He heard his father’s voice and laughed. “You’ll want to look through them some day.” And so it was.

The next Writers’ Day will take place in St Andrew’s Church Hall Witchford on Saturday 30th June 2018, 1000 to 1500. It will be part of Ely Arts Festival and will also have an accompanying short story competition in line with the Arts Festival theme: flora and fauna.. To enter this competition, send an unpublished 500-word story containing the words ‘plants’ or ‘animals’. There will be a cash prize for the winner.  For more details, contact rjwestwell@hotmail.com.