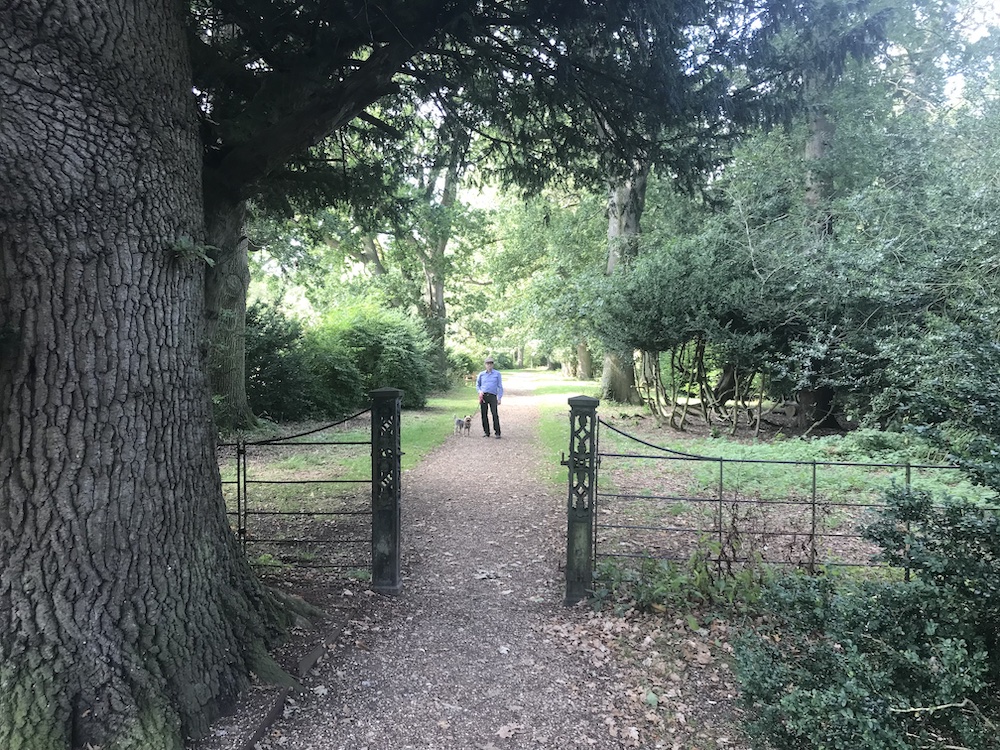 Ickworth was conceived by Frederick, the 4th Earl of Bristol and Bishop of Derry in the last years of the 18th century, and was always going to be something else. Built not so much as a comfortable house but as a place to house treasures from a couple of decades of the ‘Earl-Bishop’s’ never ending Grand Tour, Ickworth is in the glorious tradition of English impractical grandeur, with it’s monumental central Rotunda and striking wings.

Don’t get me wrong, the setting of The Ickworth Hotel (or simply The Ickworth) is spectacular and grand, but also just so charming. And as the venue for the afternoon tea, served from a nice and early 2pm in our case, it was actually, with the friendly staff and the tea itself taken together, just such an enjoyable and special experience.

A good start was when the reception of this dog-friendly hotel kindly offered to look after our Yorkshire terrier Lucky. Okay we left his new agreeable handler with a couple of sizeable treats, but they supplied the dog bed and the company and we heard later that Lucky ingratiated himself with a stream of staff who patted and petted him – between bouts of snores and sleeping, which Lucky is also good at. 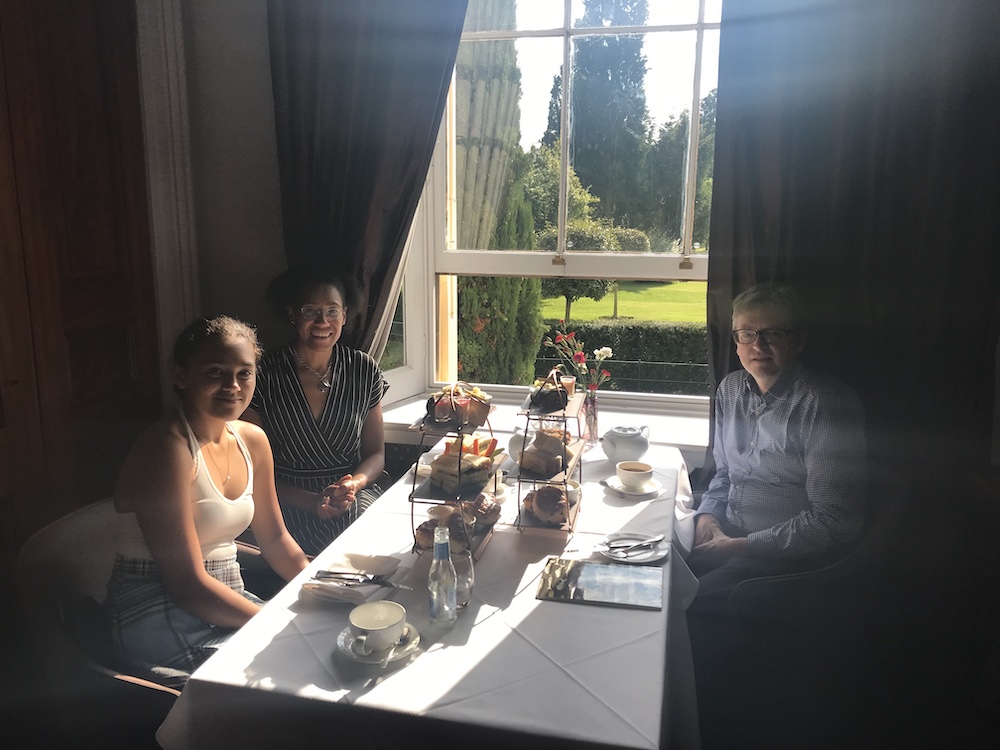 For us (Chloe, Pippa, 14, and myself), it was no ordinary tea that we were served in the grand setting of one of the Restaurants overlooking the Italianate garden. The theme was The Wind in the Willows, and Ratty’s lemonade posset and Badger’s chocolate and berry swiss roll were signature items on the original rounded wood and wire framed ‘tea server’.
Tea was of robust strength for yours truly and my wife enjoyed her Earl Grey Tea while Pippa had Wind in the Willows lemonade that would have graced Ratty’s hamper in the famous scene from Kenneth Grahame’s book. Add to that some original finger sandwiches, scones and desserts in vegetarian (Pippa and Chloe) and regular iterations and we were definitely not going to go hungry. My favourite was the delicious truffled cheddar and ham scotch egg with pickles. Yum, yum.
What was very special too on what was for us our 20th wedding anniversary, was the total absence of a feeling of being chivvied along and we could really enjoy our window views where thick, velvety Ickworth curtains shielded us from some glorious but bright September sunlight.
Later, as mother and daughter were reunited with their spoiled pet, I took a quick turn around the Italianate garden and it was a really beautiful feeling to walk out so well refreshed into the stunning gardens conceived by Lord Howard de Walden in the 19th century. A walkway curved off to the right and all around was bucolic idyll. Highly recommended: house, gardens and Ratty and Moley’s unforgettable tea. (An entry fee for the National Trust’s garden, house and estate is payable at the National Trust for non-hotel residents and non-members. Access to the Hotel is free of charge.) 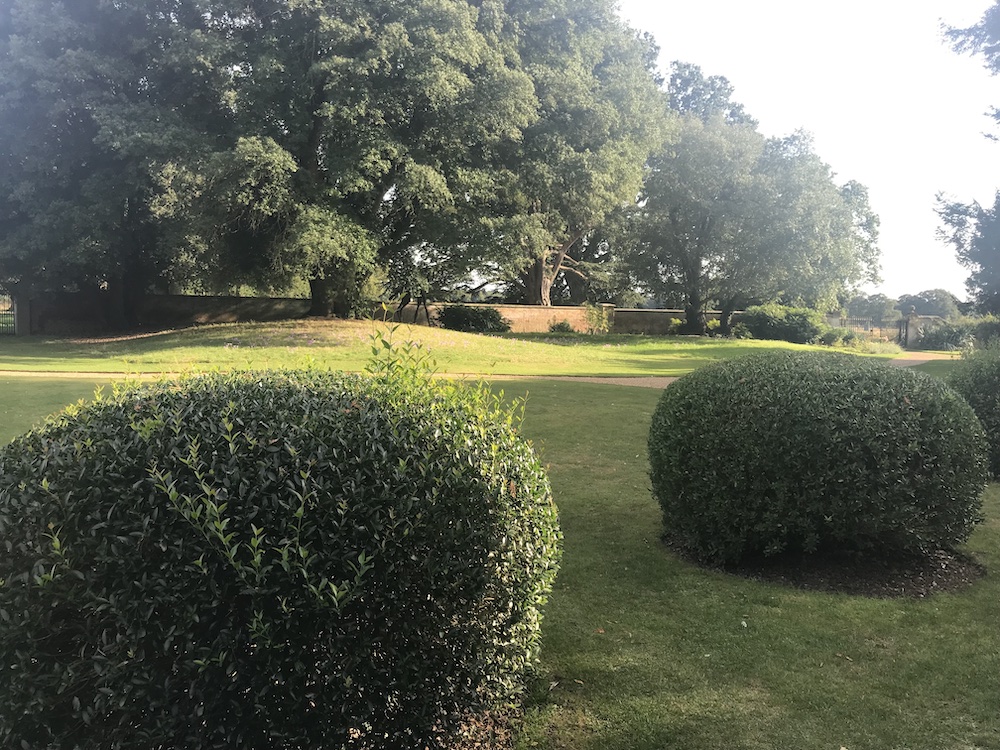 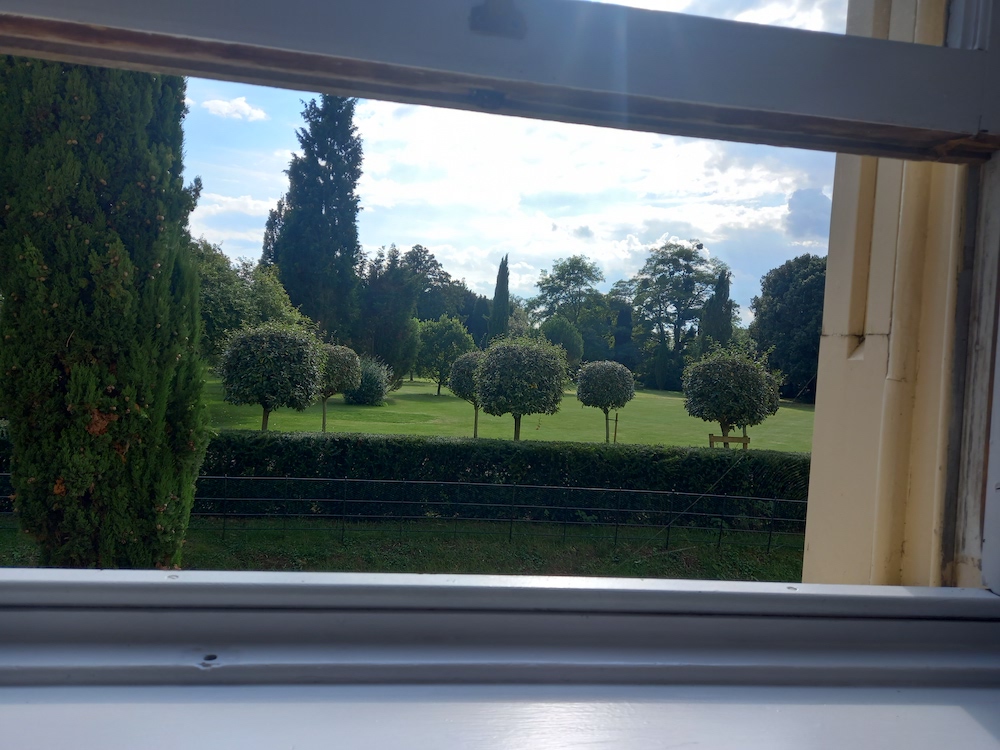 Upgrade the Adult’s afternoon tea to include a glass of Hambledon English sparking wine.

£35 per person, or in our case a delicious raspberry virgin mocktail.