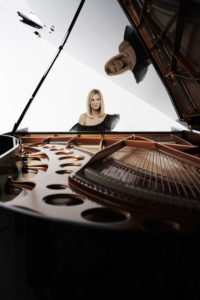 The Russian State Philharmonic Orchestra under the baton of Valery Polyansky gave a splendid concert in the Cambridge Corn Exchange on Wednesday. This was one of many concerts in the Cambridge Classical Concert Series.

The programme was enticing and we were not disappointed for we heard some of the best of well-favoured composers: Tchaikovsky and Rachmaninov.

The opening excerpts from Sleeping Beauty by Tchaikovsky captured the imagination. This orchestra created a wonderful precisely combined, robust sound that easily changed into the soft, delicate or intricate textures the scores demanded.

The highlight of the concert for me was undoubtedly Valentina Lisitsa playing Rachmaninov’s piano concert number three. Rachmaninov’s demands on pianists that play his work can be phenomenal, and this concerto was no different. However, Valentina played this challenging piece with amazing fluency and depth of expression no matter how notes were packed into the full chords or virtuosic flurries.

The final work after interval was the fourth symphony by Tchaikovsky and in this we transfixed as we revelled in the dramatic climaxes, complete with hearty percussion and the tension created by the rhythmic interplay of off the beat phrases.

The three encores were an indication of the success of this magnificent concert.

The next concert to look forward to at the Corn Exchange will be the Royal Philharmonic Orchestra on the 5th May. Contact: 01223 357851