‘Alive without breath; As cold as death;

All in mail; never clinking’

This riddle spoken in the Lord of the Rings by Gollum, is part of the Riddle Battle that followed our Real Middle-Earth tour with in-character Ranger, Halbarad. Do you know the answer? (It’s a fish.) 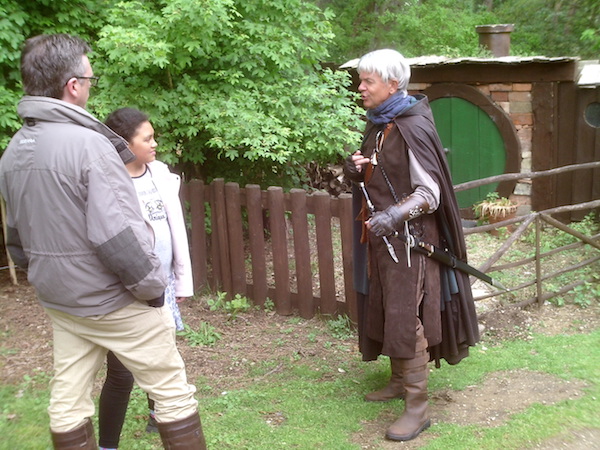 We were with Alan Baxter, to give him his real name, a heritage consultant living next to West Stow Anglo-Saxon village and what he offers is a deep immersion into the world of Tolkien’s Middle Earth on an ancient Suffolk site north of Bury St Edmunds. It takes the form of a guided tour and Alan met us in full Ranger of the North garb and at every point there were links explained that bound the world of Tolkien and his books, and the real history of the Anglo–Saxons and the archaeological site we trod. 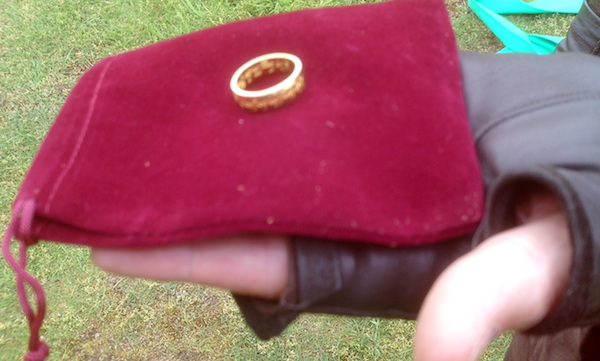 It is not surprising when one thinks, for most of his life Tolkien was a professor of Anglo–Saxon at Oxford University. He believed that treasure was ancient. Guarded by the tail-biting ‘wyrms’ (snake-like dragons) of Anglo–Saxon mythology. Treasure is best exemplified perhaps by the ‘Ring of Power’ and Alan, sorry Halbarad, had the very thing – the ring, complete with Elvish inscription glowing in the afternoon sunshine, which he acquired on a trip to New Zealand along with a stunning battle sword. 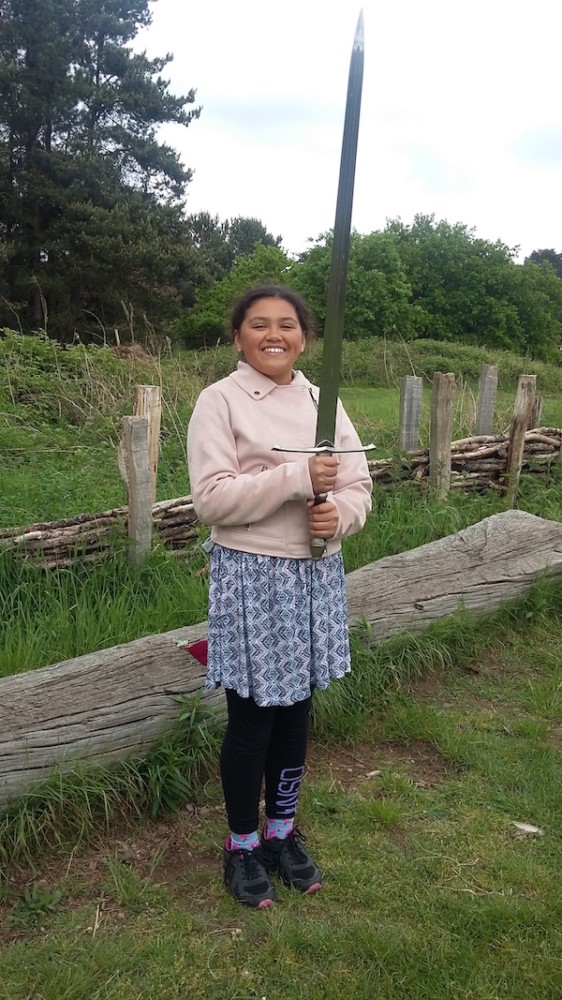 A read of Alan’s CV shows he is abundantly qualified in the worlds of museum and teaching skills and this came across strongly as he interacted with Pippa, 11.

We were on set for the ‘Born of Hope’ fan film, and above the door of the West Stow houses were runic inscriptions and Halbarad explained the characters including the ‘P’ (W sound) and ‘H’ (well, H sound actually).

There followed an Archery Experience session and Pippa, soon under Alan’s expert tuition, had the technique to fire her arrows to range and to hit the target, via her longbow. It is instinctive archery and a next phase of considerable shooting time involved getting maximum elevation for long-distance work. 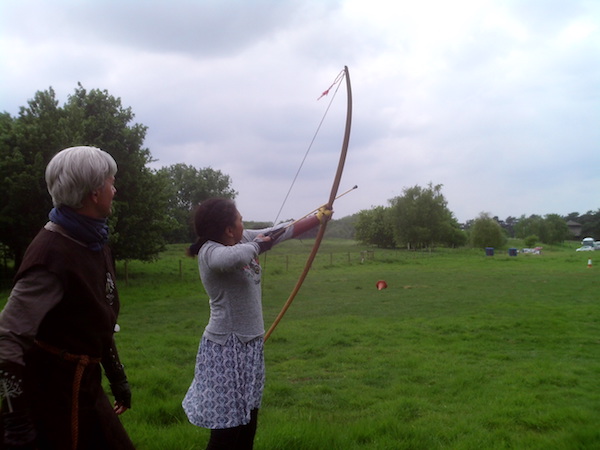 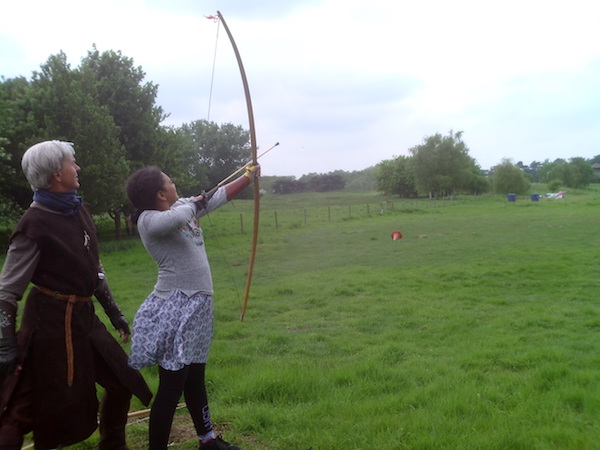 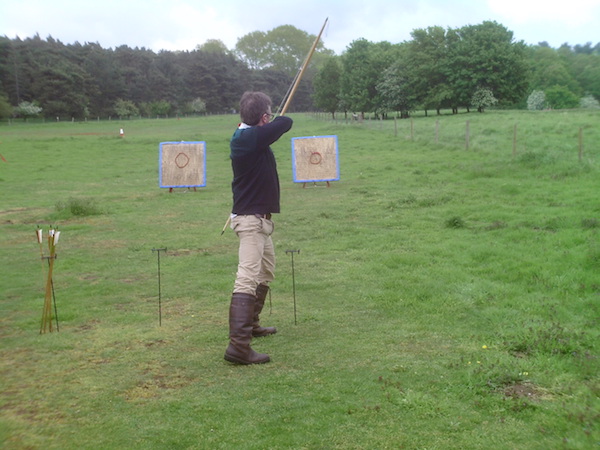 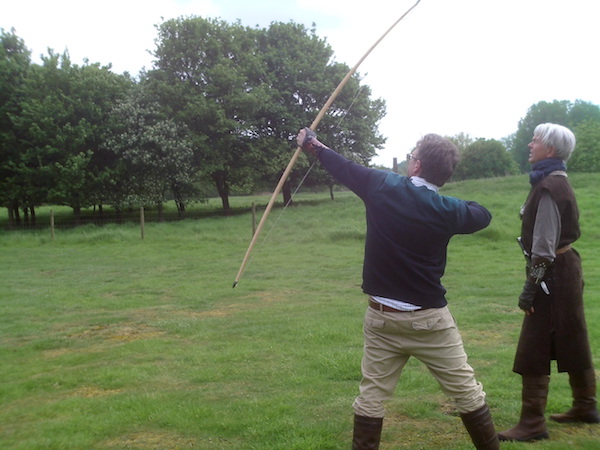 Time, finally for a photo shoot and having, ourselves stayed a few weeks earlier at Pod Hollow with its Hobbit house we could put two and two together and imagine combining Alan’s excellent window into the past with an actual overnight stay in Tolkien land. 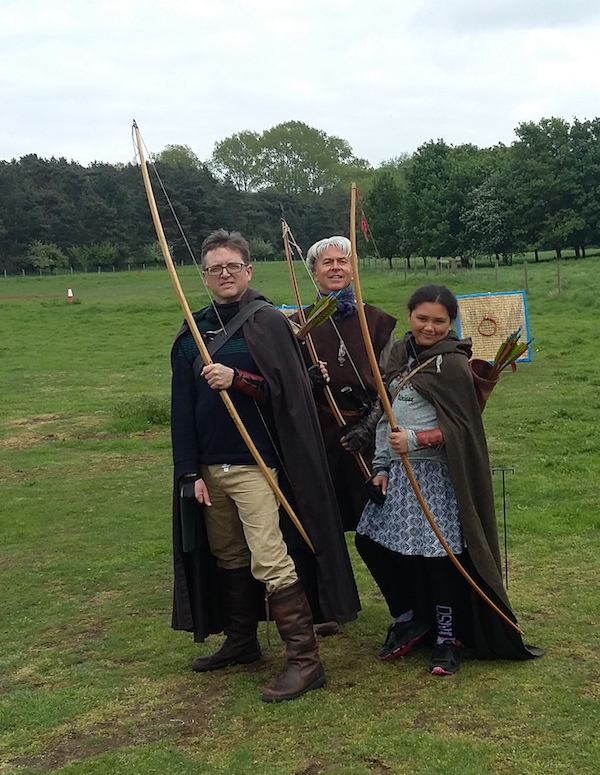 Arnor is the ancient Lord of the Rings land inhabited by the kind-hearted Rangers and Alan was a worthy successor – just go with the flow and he’ll take you through the centuries back to the time of Elves, Dragons and the warriors of old.