When we told Olivia’s grandparents we were taking her for a driving experience at Norfolk’s Snetterton racing circuit there was a silence at the end of the phone as they grappled with the implications. After all, she’s only 11 years old.

But that’s the point of YoungDrive!, it offers a first driving lesson, off the public road, for 11-17-year-olds. Throw in the undeniable excitement for children – and let’s be honest parents too – of the famous racing circuit element, add the fact your little darlings will be driving a snazzy new MINI One under the dual-controlled supervision of a DSA-approved instructor and you’re on to a winner. 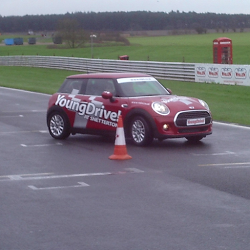 The reality is YoungDrive! gives a head start to driving lessons on public roads but crucially it is also fun. We arrived (easily accessible off the A11) at the Snetterton garages, or rather a plush reception whose reception desk glowed neon red in a way that drew approving comment from Olivia and her sister and cousin.

Customer service provided by Steph was smooth and professional and after a short spell on comfortable leather sofas in the reception Olivia and two others aged 13 and 16 (girl and boy respectively) in her group were being briefed by instructor Stuart.

“We’re on the 200 (outside) circuit, we’ll keep to the left hand lane as we’re not racing.
“Driving gives you freedom, but many accidents occur within two years of people passing their driving test so be vigilant and cautious.”

That was the serious stuff and then, said Stuart: “Driving should be fun.” Then it was outside. 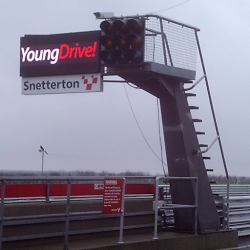 After a quick look at the smart MINI and photo opportunity the three students got in the car (each driving in turn, the others in the back with a total 35 mins driving time each) and set off on the two mile circuit.

As the car disappeared up the straight on the glistening track (there was a light rain falling) I stood on the raised viewing platform (concrete with railings) and talked to manager, Paul. “As well as YoungDrive! there is Young Drive Plus,” he said. “Also for 11 years up, and with both you must be over 4ft 8in. 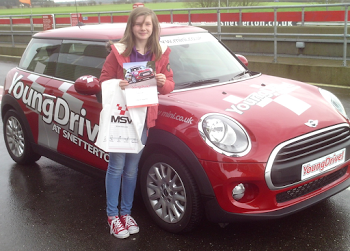 The Mini passed us, Olivia driving. She was smiling. We were at the track about three hours. Olivia enjoyed her Snetterton experience very much, she said: “It’s fun being able to drive on your own.”

And to be at a place where the likes of Lewis Hamilton, Jenson Button, Damon Hill and James Hunt have raced is quite something!

She received a progress report completed to genuine spec with columns for driving actions marked for introduced, prompted and up to independent levels (the ticks were in the prompted columns). She held her certificate and on it Stuart had written:
“Well done Olivia, great first drive.” 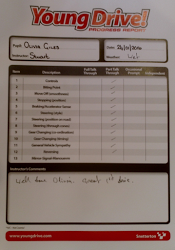 We both agreed it had laid a good basis down for her future driving.