A more relaxed group of chaps it would be hard to find, as we opened the doors of the Norfolk Gliding Club at Tibbenham Airfield on Sunday morning in early July, but the relaxed air was tinged with disappointment.
For on this day the weather gods were against us (all of us, we were not the only ones hoping to fly) with rain bands sweeping in and thick cloud and if you’d told me in two hours’ time I’d be diving at 100 knots (115mph) through the skies above in the pride-and-joy of NGC’s gliding fleet, I would not have believed you.

That said having driven across Cambridgeshire and Norfolk (and, it has to be said, experienced a lot of 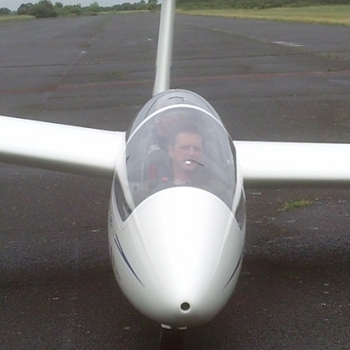 trouble finding the airfield amid the tiny C-roads stretching between Long Stratton and Attleborough) we showed ourselves more than willing to wait as we followed the excellent Will It Rain Today website on our smartphones, checking for signs of clearer weather to blow through.

There was another attraction in the meantime – well two. First things first the superb full English breakfast served from the club’s impossibly small kitchen. The other was the chance to talk to the club’s elder statesman, Barclay, who is the most senior in years, was the self-appointed historian of the club.
“There have been aircraft operational here since First World War days,” said Barclay. “But it was in 1943 that the airfield was recruited to the war effort and it was actually the Americans – a US Airforce B24 Bomber group, which was stationed here.

“Four squadrons (about 40 aircraft) were at Tibenham for the rest of the war when the airstrip reverted to RAF hands until 1956. Bits of the runway was then added and sold off as hardcore until the club was formed and bought it.”

Around the walls of the club, which includes a nice-looking bar, were black-and-white wartime photos of the B24s and their crew, including Hollywood star James Stewart.

What was amazing when the rain finally cleared was the way the team, including pilots Will and Sean, 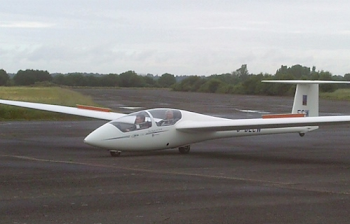 became different people almost as they readied for action. Suddenly (and thanks to the great kindness of all club members who helped) my flight was on and we got the glider out on to the runway.

After another brief (predicted) rain shower we dabbed away the rain from the wings and daughter Pippa helped too!
Then I was strapped into my parachute, told which red knob to pull in an emergency to release the canopy, and how to deploy my ’chute.

All of this was somewhat alarming but from the moment we were towed up to 3,000ft I felt fine. I was in the front seat and Will behind and we took off first, then the plane in front. When the tow-rope was released was an amazing feeling and soon we were going at 30 knots or so, banking, dipping and I took the controls on three occasions and – well, really flew. It was amazing.

So how far can a glider fly? It depends on thermals (none on the day I flew), but club members can fly to the Midlands and someone flew from South Wales to Bungay (down the road from Tibenham) and back in one huge flight recently. 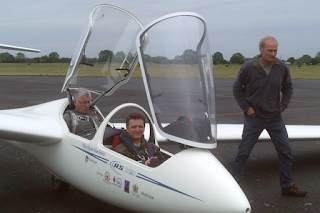 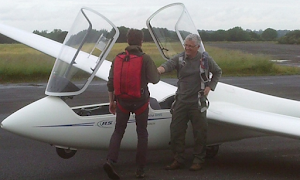 Some great views down below and then the Big Dive and before we knew it we were down.
Personally, of all the flying experiences I have had going on EOE experiences, this was the most gripping, but above all memories of a great bunch of lads down at NGC. Highly recommended.

So, treat yourself, or surprise somebody with a trial flight at the Norfolk Gliding Club. East Anglia’s premier gliding club is based at Tibenham airfield just north of Diss so you can soar serenely amongst the puffy white clouds above Norfolk and Suffolk!