-Free admission for children aged 11 and under- 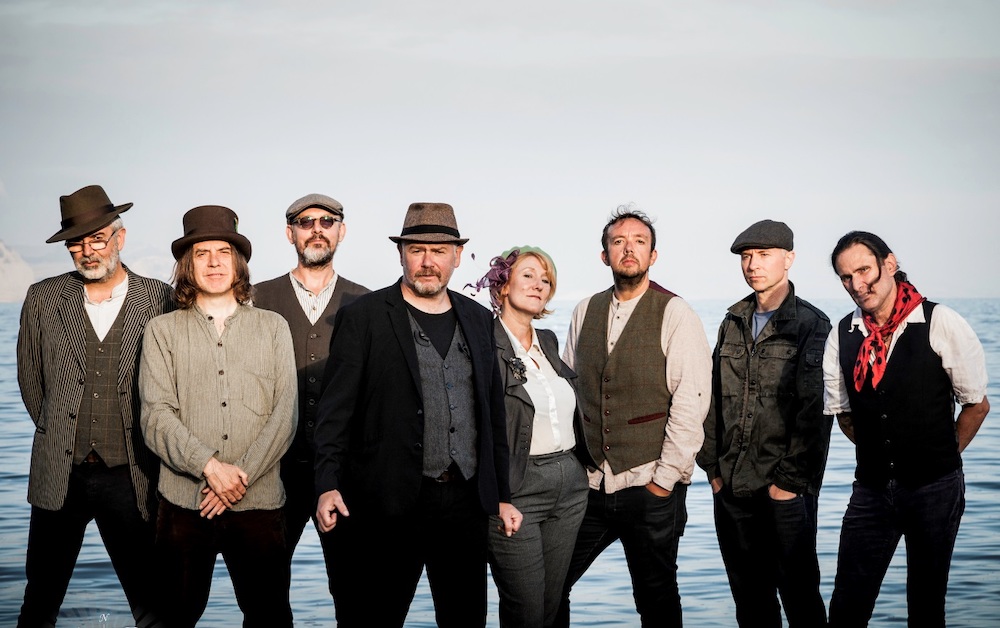 “FolkEast feels more like a very English village fete than a festival, with the good humour and unpretentiousness of its patrons The Young’uns, the guiding vibe”

Guitarist and songwriter John Kettle and his brothers, mandolin player Bob and vocalist Andrew, former members of the 1990s folk rock band The Tansads, formed Merry Hell in 2010 and the band now has six albums and a big following to their name. The line-up also includes John’s wife Virginia on vocals, Lee Goulding (keyboards), Andy Jones (drums) and Neil McCartney on fiddle.

At the start of the year the festival favourites released the timely single When We Meet Again – an uplifting riposte to lockdown https://youtu.be/_yeAsNg7K6E which they described as ‘looking forward to the pleasures of being with the people whose company we enjoy, whether it be spending time with friends and family, or simply getting back to gigs and festivals and sharing our music and joy with audiences.”

For their latest album Emergency Lullabies, not only did they overcome the challenges of completing it during lockdown but the extraordinary events of 2020 provided much inspiration, resulting in a raft of anthemic sing-alongs built on the theme of solidarity and community, including the track Beyond The Call in celebration of the NHS and written the night the UK went into lockdown.

FolkEast organisers John and Becky Marshall-Potter are also delighted to announce that captivating rising star Lady Nade will be joining the line-up.

Fusing Americana, folk and soul, she is a wholly distinctive performer – her third album Willing championing the positive connection between music and well-being and the importance of equality and diversity within the arts.

Based in Bristol her tender voice is like balm and her music has healing qualities as she touches on topics from anti-bullying to positive body image.

As well as performing, Lady Nade will be chatting to Amy Wragg (curator of FolkEast’s Soapbox Stage) about inspirational women in music.

“There is no mistaking the tender, powerful, velveteen vocals of Lady Nade’ – Folk Radio

“Love her voice – check her out” – Mark Radcliffe, BBC Radio 2

The ninth FolkEast will return to the glorious Constable-esque grounds of Elizabethan Glemham Hall in a streamlined, slimmer, spacious and COVID –secure way – with most of the original 2020 line-up preserved.

headlining Saturday night while topping the bill on opening night will be Elephant Sessions .Named the Best Live Act at the Scots Trad Music Awards in 2018, the quintet will head to Suffolk from the Scottish Highlands with their unique brand of indie folk.

Advance weekend and day tickets will be on sale until Wednesday, August 18 – no tickets will be available on the gate. Ticket costs have been frozen at last year’s prices – a competitive £120 for a weekend adult ticket (£110 for students and over 65s) and £80 for 12-17 year olds while a great offer sees free admission for children aged 11 and under. More information: https://folkeast.co.uk/2021-tickets/

“Says Becky: “We have had to make some difficult decisions in order to go ahead this year. The most important thing is for everyone who is coming to FolkEast 2021 to feel safe and comfortable being back together again – to enjoy great music in good company.”

Festival regulars will see a change of site layout to allow for a one-way system if required and just two open-air stages – the main Sunset stage and Moot Hall– plus a large, airy workshop space.

“In a world where there are hundreds of festivals, FolkEast prospers by doing something unique and doing it brilliantly” – RnR Magazine

The powerhouse sextet of female instrumentalists that is The Shee (including BBC Radio 2 Folk Awards Musician of the Year 2017, harpist Rachel Newton) are also sure to have the wow factor with their adventurous blend of Scottish folk, Gaelic song and bluegrass.

Says Becky: “We can’t wait to reunite the FolkEast community– we know how much everyone has struggled over the last 18 months and it will be a momentous occasion when we open the FolkEast gates once more. We are going all out to celebrate as we move towards our 10th anniversary next year.”

Located close to the A12, the festival will be running its usual shuttle buses to the site from Wickham Market station. For the full FolkEast 2021 plan see www.folkeast.co.uk.