The Voice Project at Houghton Hall

New project ‘I Reach Right Up to the Sun’ to be performed amongst stunning Henry Moore sculpture exhibition
Norwich’s multi award-winning Voice Project Choir are presenting two very special summer performances in the spectacular grounds and gardens of Houghton Hall near Kings Lynn on Saturday 6 July at 5.30pm and 8pm. 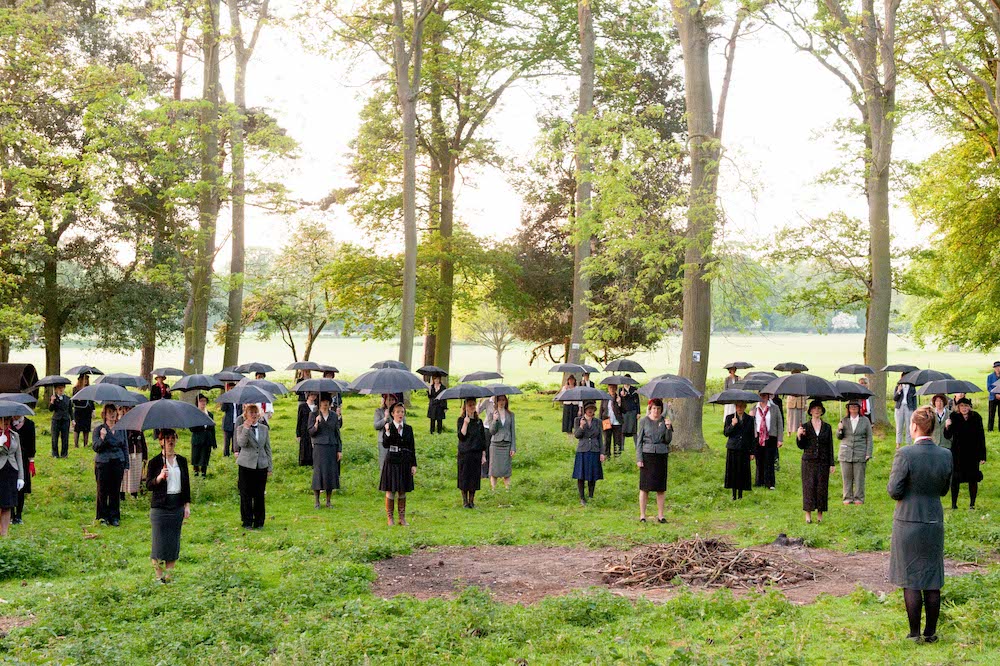 I Reach Right Up to the Sun is being specially created to be performed among the exhibits for Henry Moore at Houghton Hall – Nature and Inspiration. All the music is written specially for the 100 voices of the choir by composers Karen Wimhurst, Helen Chadwick, Orlando Gough and Voice Project co-director Jonathan Baker. As ever the choir will be conducted by Jon’s fellow Voice Project co-director Sian Croose.
Jon and Sian have worked closely with Houghton Hall to create a promenade performance that allows the audience to gently stroll around the exhibits and view them from a fresh perspective, creating a new interaction between sculpture and ethereal vocal music.
The exhibition is the first significant show in East Anglia of Moore’s work. It sits alongside Houghton Hall’s permanent exhibits which include iconic works by landscape artist Richard Long, Rachel Whiteread and James Turrell.
Jonathan Baker said ‘When Sian and I heard about the Henry Moore exhibition we felt immediately inspired to create something that would link this magnificent building and its grounds, the exhibition and permanent collection.’
Sian Croose added ‘The choir are really excited at the prospect of performing in such an extraordinary setting.  It’s the next step in the series of events that have seen us celebrate such iconic buildings as the Sainsbury Centre for Visual Arts, Norwich Cathedral, Holkham Hall, Norwich City Hall, St Andrews Hall, Salthouse Church and St Benet’s Abbey.
The Voice Project was founded in 2008 by experienced singers and educators Sian Croose and Jonathan Baker as an education charity to run regular courses in singing for people of all abilities. The choir is totally open access and anyone can join whether they have any experience of singing or not. Despite this, their performances are produced to exacting professional standards. The choir has been regularly commissioned by Norfolk & Norwich Festival and performed with significant guests from the jazz and contemporary music fields. Their broadcasts include TV on BBC 1 and ITV, prime time French television and radio broadcasts on BBC Radio 3 and Radio 4. For full details of all the Voice Project’s activities visit www.voiceproject.co.uk
Henry Moore (1898 – 1986) is considered to be one of the most important British artists of the 20th Century and arguably the most internationally celebrated sculptor of the modern era. Houghton Hall was built in the 1720s for Sir Robert Walpole, Britain’s first Prime Minister. It is the family home of the 7th Marquess of Cholmondeley, Walpole’s descendent, and his family.
Jonathan Baker and Sian Croose are available for interview, contact Steve Forster as above for availabilities.
Listings information:
Saturday 6 July, 5.30pm and 8pm
I Reach Right Up to the Sun: The Voice Project Choir’s new piece specially created to be performed amongst the exhibition Henry Moore at Houghton Hall – Nature and Inspiration.
Houghton Hal, Bircham Rd, King’s Lynn PE31 6TY
Tickets £14 (£12 concs), under 12’s £5, donation rate £20.
Available from www.voiceproject.co.uk
For full details and to book tickets visit www.voiceproject.co.uk
Continue Reading