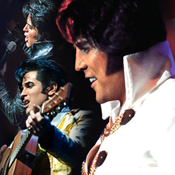 ‘The Elvis World Tour’ is coming to Watford Colosseum in October 2018. This is the largest and most successful touring Elvis tribute show and stars America’s finest, Shawn Klush and Dean Z, backed by an incredible live band and orchestra, direct from the USA! Shawn and Dean will be joined by special guest Ben Thompson, from the UK, to capture the mood and era perfectly.

Dean Z has performed a Las Vegas residency for Legends in Concert at the Flamingo Hotel and Casino. In 2013, won the title of Ultimate Elvis Tribute Artist which was sanctioned by Elvis Presley Enterprises, Inc. and from rave reviews we know that he is worthy of his spot with the World’s Greatest Live Tribute Show, headlining the show in Branson, Missouri from 2007. “As Dean Z kicks off with ‘Shake Rattle and Roll’ it is evident from the very first thrust of the hips this guy not only has the looks, the voice, but also the incredible moves as further demonstrated during the next song ‘Such A Night’.” Dean received the Heart of the King Award in Las Vegas at the former Las Vegas Hilton, the same stage Elvis himself performed over 700 shows during the 1970s.

Still humble, Dean says; “I’m very lucky to have the opportunity to perform the greatest music ever made” in a recent interview for the Las Vegas Review Journal. “I’m so honored to help prolong the legacy of the greatest entertainer to ever grace a stage, Elvis Presley.” So, to mark the occasion of having Dean perform here at Watford Colosseum, we took the opportunity to find out the answers to some burning questions!

Q: Which is your favourite Elvis era?

I think my favourite Elvis era, I mean I love all of it, I’m a big Elvis fan first and foremost, that’s the reason I do this is because this is how I choose to show how much of a fan I am, but I do feel my favourite Elvis era is hands down the 1968 comeback special when Elvis wore that black leather suit in Burbank in the NBC studios for the television taping. I think Elvis was ready to come back to live performing, and he moved with such precision, and he just was like, at his absolute peak I believe he looked incredible, he was in such great physical shape, and that’s what we try to show when we do these shows, show Elvis in the best light, so I think that personally is my favourite era that Elvis had.

And basically I just want the readers to know that I love coming to England, and I have deep roots in England with both my Mother and my Father being born right there in London, they emigrated to the united states in 1980 so I was born here but I am English through and through, and so it’s always nice to come back to England and to kind of feel that homecoming, those roots are still so strong there with a lot of family still living in the area, so I always look forward to performing in Great Britain, and looking forward to many many more tours all throughout 2019 and beyond with Elite Concerts International & Brian Shaw, and I just want to thank them for the opportunity to keep Elvis’ music alive in the UK.

Q: Tell us about the first time you met Shawn.

Well Shawn is quite a legend in the Elvis world, in his own right. Shawn is the first winner of the ultimate Elvis Tribute Artist Championship in Memphis Tennessee.

I met him quite a few years before that when I was still a teenager, I saw him in shows and you know he’s someone that I’ve always looked up to and someone that I think has always done Elvis proud in his performance on stage and really captures something special.

Shawn is a top level entertainer in his own right. The first time I met him I was probably 13 or 14 years old and he was always very supportive of me then. We love working together, I really enjoy our time, we cut up and we’re actually good friends so it’s nice to be on the road with him.

Q: What can fans expect from this upcoming tour? Is there anything new to see for fans who’ve seen you before?

I think our show has something for everybody, you know, it really is a top notch production show with incredible lighting, sound – you feel like you’re at an Elvis concert when you’re at our show, and it’s almost like we brought it into the 21st century with the quality of all of the lighting and the sound and everything, it’s really got that production value, and that’s because Elite Concerts International & Brian Shaw does an incredible job making all that happen, but basically you’re going to see 20 years of Elvis’ career in 2 hours, from the fifties, the movies, the black leather, and into Elvis in the Las Vegas concerts. So it really does kind of encapsulate his entire career, and hopefully people leave really understanding why Elvis was so great and what made him so special to the entire world of music.

The audience will be on their feet, creating the greatest Elvis Spectacle on Earth! It must be true, “you wait ages for an Elvis and then three come along together”! And you can see all three at Watford Colosseum this autumn. For more information and tickets please visit: https://watfordcolosseum.co.uk/Online/tickets-the-elvis-world-tour-watford-2018