The Audit (or Iceland, a modern myth) 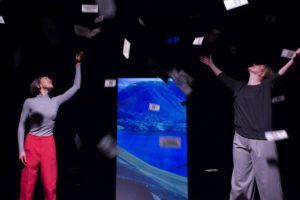 The global economy is a mess. The crash has landed, the tide’s swept out, and it’s taken our hope with it. There’s less in our pockets and more to be spent. The rich have got richer, the middle’s squeezed tight, and the poor are being dragged ever downwards.

Proto-type Theater’s new show THE AUDIT (or Iceland, a modern myth) looks at the human cost of the corporate and personal greed that consumes countries – and tells how one nation raised their voices in protest and railed against the currents. How can a small island nation survive when it is going it alone with economic relationships?

Suffolk audiences will be able to see this exciting new show at the New Wolsey Studio on Friday 8 June, as part of the Pulse Festival.

2018 marks the tenth anniversary of the worst worldwide financial crisis since the Great Depression of the 1930s and THE AUDIT asks if we really weathered the storm? Surrounded by greed and with international finance crashing, we follow a citizen, a country, and gods old and new, as they confront economic crisis and powerlessness. THE AUDIT uses original text, performance, film, animation and specially composed music to inform, entertain and challenge.

In a world where the driving force behind nearly every decision that affects our daily lives is profit THE AUDIT is about finding strength, overcoming a world designed to keep us docile, and seeks to show that collective power can move a mountain – even if only a little.

Written and directed by Andrew Westerside and devised and performed by Rachel Baynton and Gillian Lees this is Proto-type’s second theatrical work examining contemporary politics. A Machine they’re Secretly Building, a ‘smartly intelligent hour-long whizz through the world of surveillance’ (Lyn Gardner, The Guardian) thrilled audiences and critics alike on tour and was selected for The British Council Showcase at the 2017 Edinburgh Fringe. THE AUDITreunites the team with digital design from Adam York Gregory (‘so seamlessly incorporated into the action it’s almost another performer’ Exeunt) and music and sound design by Paul J Rogers.

Rachel said ‘We conceived The Audit as a companion piece to A Machine, throughout our investigations for that show we kept coming back to the unavoidable truth that money is behind everything.’

Gillian added ‘In researching the show, we spoke to academic economics experts as well as with special interest and community groups across the country to share experiences and discuss the profit motive that is behind the decisions and systems that govern our daily lives.’

Proto-type are a company of multi-disciplinary artists led by Rachel Baynton, Gillian Lees, and Andrew Westerside. The company has been making work and supporting young artists in the US, the Netherlands, Russia, China, Armenia, France, Zimbabwe and the UK since 1997. www.proto-type.org

The Audit (or Iceland, a modern myth)
New show from acclaimed company Proto-type Theater tells the story of how a nation raised their voices in protest, and how collective power can move a mountain – even if only a little.
Age 14+ 60 minutes, no interval.
Friday 8 June 6.30pm
Pulse Festival at New Wolsey Studio, St Georges St, Ipswich IP1 3NF
£10/£5  www.wolseytheatre.co.uk  01473 295900
Continue Reading