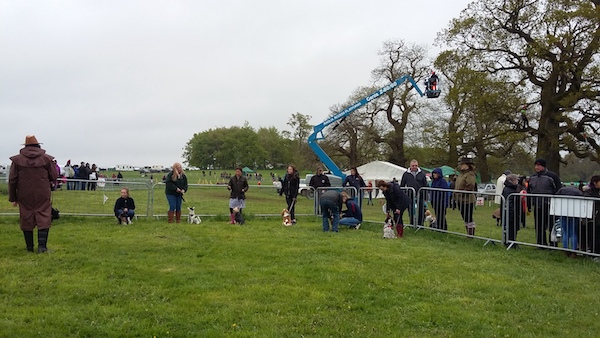 The fair opened for its second year at Euston Estate, near Thetford and was another success with impressive numbers of the public joining busy rows of countryside and field sports attractions. As well as the Falconry Village and Cookery Theatre, there was the Countryside Association represented by the CLA, BASC and National Organisation of Beaters and Pickers Up.

First and 2nd Avenue North were the major retail areas and some good buys were available in garden furniture and clothing, as well as fine wines and even strawberries, marshmallows (for the kids), choc and cream – all in one plastic cup!

Moving downhill there was the famous ferris wheel on the right, I always think a snip at £2.50 for a traditional, gentle but elevated ride with the best views of the show. Heading straight on here towards the house was the Main Arena with its three grandstands plus members enclosure. And it was here on the Sunday morning, Alan Riddell, gave a flycasting demonstration, first sending a sweet line out on a singlehanded (trout) rod, then Spey casting with a very nice lightweight customised 15-footer (pictured). I later caught up with Alan on the ‘fisherman’s row’ part of the show, his neighbouring stand being the Norfolk & Suffolk Flyfishers’ Society gently promoting not only their lakes at East Tuddenham, but also excellent work on accessibility and breaking down the sport’s sometimes elitist image.

Of course a major attraction at the fair are the dog events and competitions. As well as one of the better dog agility courses you will come across, there was a big attendance for the open pet dog show where children and their gorgeous dogs, many of them rescue dogs, lined up for a busy series.

New for this year was the K9 village (basically the dog show and agility course area, extending to the ever-popular Duck Dogs where dogs do a long jump into a pool, to a groovy soundtrack of dance classics).

Add in also some great names at the Cookery Theatre, from Ben Handley and Andrew Waddison of the Duck Inn to Scott Dougal of the Wells Crab House restaurant. Whole Food Warrior Eva Humphries promoted her ‘evidence-based nutrition’, while Daniel Freear and Mark Elvin of The Boars formed another brace of head chefs with some superbly creative dishes explained.

On day 2 a steady stream were still entering as we started to head homewards, having started first thing, but this was an impressive show of the power of the rural, the ecological, the sporting types and of course the foodies.

Thanks to Henry Fitzroy, 12th Duke of Grafton and family for another good year.