First, there was paintball. You know the sort of thing corporate types and young men on stag parties would get up to in the woods of Essex, Suffolk, Cambridgeshire – and here at Skirmish Central in Northants. 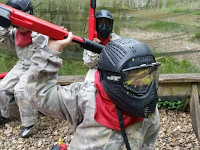 It can get heated, it can get a bit of an edge to it – aggressive, even. And for children, there could be tears. It is after all war games but it heads towards the more adult and for this reason is available only to 12-year-olds and upwards.

Centres have sprung up nationwide but we were at Skirmish Central, Northants, which has been going for 30 years so has heritage. It also offers Laser-tag, Airsoft, and now Splatball, over its 26 acres of woodland.
​
The centre is divided into themed game areas, or arenas called, the Village, Jungle and so on – with features like forts and trenches. Fifteen staff manage things safely and I joined proceedings (for two full games at the end of a session, actually an 11-year-old’s birthday party, with my eight-year-old daughter Pippa). 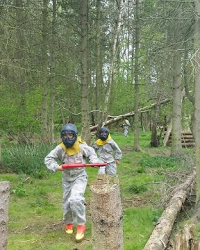 Pippa was on the minimum age borderline, so we went to collect our uniform and helmet. Skirmish Central are strict about times helmets can be worn, even in the ‘dead zone’ between games and helmets only com off when the yellow safety plugs are in the end of the ‘markers’ (guns, basically).

Skirmish leader Chris introduced us to James and Hannah, who were running the session. We loaded our markers/guns with 16 splatballs and our first game was defence, defending a ‘house’ complete with windows to fire through and get fired at through. The enemy blue guns approached and we had to fire repeatedly back the issue being after a while the ammo ran out and there was an element of firing for effect although the rules strictly applied mean once on empty you retire. 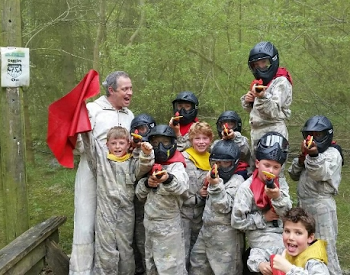 So what is Splatball? It’s a fun gaming equivalent to paintball, using ‘pump action’, spring-loaded, low-calibre markers to fire 15 or so biodegradable, stain-resistant pellets. The guns are cheerful bright reds and blues. Splat balls fire a decent trajectory over 25 yards and if they hit you close up you can feel them!

The fact the gun/marker has to be cocked slows the pace but and we were very much thrown into the battle and Dad felt he had to protect Pippa and consequently grabbed her gun off her, firing a hail of splats through the windows of our shelter. Pippa was not happy about me hogging the gun (s) but we sorted things for the next game!

I got hit to the amusement of the kids but felt I was contributing and I was amused to find my heart rate was pounding. I felt bad I had ‘neglected’ Pippa whose gun was stuck in safety mode at one point and I perhaps shouldn’t have grabbed it off her but felt like I was in a Western and had to protect my daughter.

Next round was a straightforward skirmish through the woods and Pippa had the hang of things and did well. Recommended as a staging post to paintball and also fun as a game in its own right!

Prev Next
Stay With Us