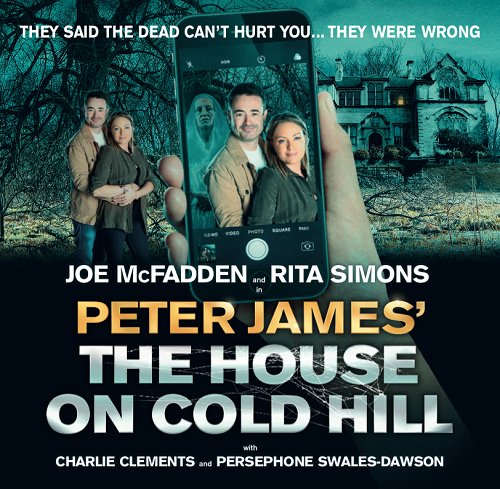 As previously announced, the thrilling work of multi-million selling author Peter James returns to theatres from January 2019 with the world premiere production of the spine-chilling stage play The House on Cold Hill which comes to Milton Keynes Theatre from Mon 15 – Sat 20 April.

Adapted from his best-selling 2015 novel and based on the author’s own real-life experience in a haunted house, the play will star the previously announced, BAFTA nominated actor and winner of BBC1’s Strictly Come Dancing 2017,  Joe McFadden (The Crow Road, Heartbeat, Holby City) as ‘Ollie Harcourt’ and joining him, as his wife ‘Caro Harcourt’, will be award winning actress Rita Simons, (who played the iconic Roxy Mitchell in Eastenders), as well as award winning actors, Charlie Clements(‘Bradley’ in EastEnders) as ‘Chris’, and Persephone Swales-Dawson (villainess ‘Nico Blake’ in Hollyoaks) as ‘Jade’, making her professional stage debut.

In Peter’s ghostly mystery, the Harcourt family – Ollie, Caro and daughter Jade – move into the house of the dreams that has been empty for the last forty years. However, their dream home quickly turns into the stuff of nightmares, as they begin to sense that they aren’t the only residents at Cold Hill…

The House on Cold Hill is a modern-day ghostly thriller that will send shivers down your spine and make you think twice about returning home to a dark, empty house after the show!

Rita Simons is best known for playing ‘Roxy Mitchell’ in BBC’s Eastenders, and is one of Britain’s best loved TV actresses. She won Most Popular Newcomer at the National Television Awards and other awards and nominations include Best Newcomer at the Digital Spy Soap Awards, Best Onscreen Partnership for her character partnership with Ronnie Mitchell played by Samantha Womack, Best Newcomer at the TV Now awards, a nomination for Best Newcomer at the British Soap Awards and Best Newcomer at the Inside Soap Awards. Rita has also appeared as Hannah in Mile High, Julie in Dream Team and recently toured the UK and Ireland as Paulette Bonafonte in hit musical Legally Blonde.  In Spring 2012, Rita was the subject of a major documentary film Rita Simons: My Daughter, Deafness and Me made by Leopard Films for primetime BBC1. Rita actively supports the charity RNID. Most recently Rita received rave reviews for her performance as ‘Lisa Prescott’ in the film The Krays: Dead Man Walking, an untold chapter from the notorious legend of the Kray Twins.

Rita Simons said, “I am really thrilled to be starring in the House on Cold Hill along side such great actors as Joe, Charlie, Persephone and the rest the cast. I could not put it down when I first read the script – it’s a brilliant and modern day supernatural thriller that had me totally gripped and occasionally jumping out of my seat! I can’t wait to see audiences hopefully have the same reaction to it, in theatres around the UK.”

BAFTA nominated actor Joe McFadden is perhaps best known for playing series regular ‘Raf di Lucca in BBC1’s Holby City from 2014 – 2017, and as ‘P C Joe Mason’ in Heartbeat from 2010 – 2014. Other acclaimed TV roles include Sex, Chips and Rock n Roll, The Crow Road (for which he received a BAFTA nomination), Cranford and Take The High Road. His extensive theatrical credits include working with John Tiffany and the National Theatre of Scotland on The Missing, touring the UK with Alan Ayckbourn’s Haunting Julia, Harvey Fierstein’s Torch Song Trilogy at the Menier Chocolate Factory, Rent at the Shaftesbury Theatre in the West End and Rainbow Kiss at the Royal Court. Last year he partnered with Katya Jones in BBC1’s Strictly Come Dancing and captured the nations hearts, eventually winning the series to become the 2017 Strictly Champion.

Joe McFadden said, “It’s a real honour to be entrusted with the character of Ollie and the words of skilled wordsmith, Peter James. He’s created a story that is both chilling and an interesting portrayal of modern family life and will definitely make you think twice about buying that sprawling dream pad in the country!”

Charlie Clements starred in EastEnders from 2006 – 2010, winning several awards for his performance as ‘Bradley Manning’. Since leaving the soap, stage and screen credits include the UK tour of The Haunting, Faith at the Courtyard Theatre, and roles in Casualty and The Bill.

Persephone Swales-Dawson played serial killer ‘Nico Blake’ in Channel 4’s Hollyoaks from 2014-16, and returned in 2018. She won Best Bad Girl at the Inside Soap Awards in 2016. The House on Cold Hill marks her professional stage debut.

The House on Cold Hill becomes the fourth play in his box office smash hit and critically acclaimed stage franchise following the huge sell-out success of Not Dead Enough, The Perfect Murder and Dead Simple on stage. Nearly half a million fans have now seen his work on stage in 30 cities across the UK and Ireland, with stars including Claire Goose, Shane Richie, Jessie Wallace, Tina Hobley, Les Dennis, Jamie Lomas, Laura Whitmore, Robert Daws, and Dawn Steele.

Peter James – author of the award-winning Det Supt Roy Grace series – has been acclaimed as ‘one of the most fiendishly clever crime fiction plotters’ (Daily Mail) and his brilliant international bestselling novels have been published in 37 languages and sold over 19 million copies worldwide. Earlier this year, the acclaimed author hit No. 1 again in the UK book charts for the 13th consecutive time, with his latest page-turner, Dead If You Don’t.

His new thriller, Absolute Proof, was published in hardback on 4 October by Pan Macmillan. Inspired by an unforgettable, real-life phone call received by the author nearly 30 years ago, from a mysterious but altogether credible source, Absolute Proof marks a major milestone for publishing phenomenon Peter James, as his most epic and ambitious stand-alone thriller to date. ENDS

THE HOUSE ON COLD HILL