RICK ASTLEY and JACK SAVORETTI will be headlining Newmarket Nights 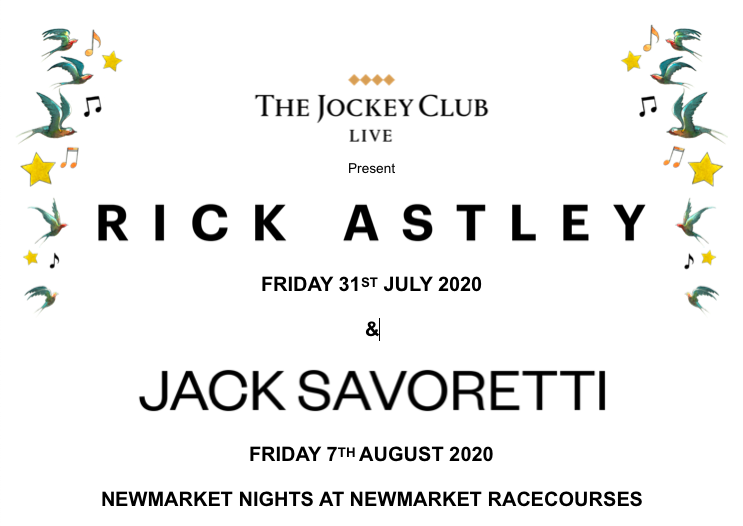 The Jockey Club Live are excited to announce that RICK ASTLEY and JACK SAVORETTI will be headlining Newmarket Nights on Friday 31st July and Friday 7th August respectively.

Rick Astley’s era-defining classic ‘Never Gonna Give You Up’ topped charts the world over and catapulted the 80’s icon on a journey that would encompass 8 consecutive UK Top 10 hits and 40 million sales. After stepping aside to focus on his family, he shot back to #1 almost 30 years later with his Platinum-selling album ‘50’. Last month, he released his career-spanning compilation ‘The Best of Me’, which also included an independently recorded set of reimagined interpretations of his songs, old and new.

2019 saw Rick complete a gargantuan 38-date stadium tour as special guest to Take That, during which he played to over 500,000 people. Showing his mass appreciation across genres, he also graced the main stage of the legendary Reading Festival this summer, performing ‘Never Gonna Give You Up’ with one of the worlds biggest rock bands, Foo Fighters.

Selling over 100,000 tickets to his own UK headline shows since releasing ‘50’, his forthcoming tour dates include gigs in Australia and Japan as well as his first ever show in New Zealand, before arriving at Newmarket Racecourses on Friday 31st July 2020.

‘Really looking forward to playing Newmarket. It is a great vibe with a lovely audience. We will have a lot of fun!’

Jack Savoretti will be making his Newmarket Nights debut on Friday 7th August. 2019 has been a whirlwind for the English-Italian singer-songwriter; months of rapturously received shows across the world; a triumphant, sold-out Wembley Arena homecoming; collaborations with artists as diverse as Kylie, Mika and Sigma; and an album that, since its March release, has sold in old-fashioned numbers – ‘Singing to Strangers’ has shifted over 120,000 copies, making it emphatically one of the break-out albums of the year.

‘Singing to Strangers’, his sixth studio album, marked a breakthrough for Savoretti – his first UK number one album. Born in London and raised in Europe by parents with multinational roots, he is continuously inspired by an array of influences, with French, Spanish and Italian music from the Fifties and Sixties playing an important role in the development of his sound.

‘We’re delighted to be welcoming both Rick Astley and Jack Savoretti to Newmarket Nights next summer. Rick is a consummate performer and with his catalogue of hits we can’t wait to see him perform. Jack has had an amazing 2019 with his album ‘Singing To Strangers’ hitting the number one spot and we’re sure he’ll put on an unmissable show when he makes his July Course debut.’

The events are renowned for combining a fun filled evening at the races with a spectacular evening concert in the informal and relaxed open-air setting of the hallowed turf. Newmarket Nights won the ‘Best Event for Groups’ at the prestigious 2018 Group Leisure & Travel Awards.

The Jockey Club racecourses have world-class customer facilities, featuring an array of award-winning restaurants that cater for all tastes, from fine dining through to delicious bistro food. The Jockey Club’s racecourses welcome over 2million people a year for some of the UK’s biggest racing events so you can be sure a fantastic evening.

Tickets will be on sale at 8am on Friday 6th December via thejockeyclublive.co.uk, with a presale available to customers at 8am on Wednesday 4th December. Tickets are priced starting at £30.24 for Rick Astley, and £29.12 for Jack Savoretti (inclusive of transaction fees). All T&C’s are available on newmarket.thejockeyclub.co.uk. There will be hospitality packages available to suit all budgets.