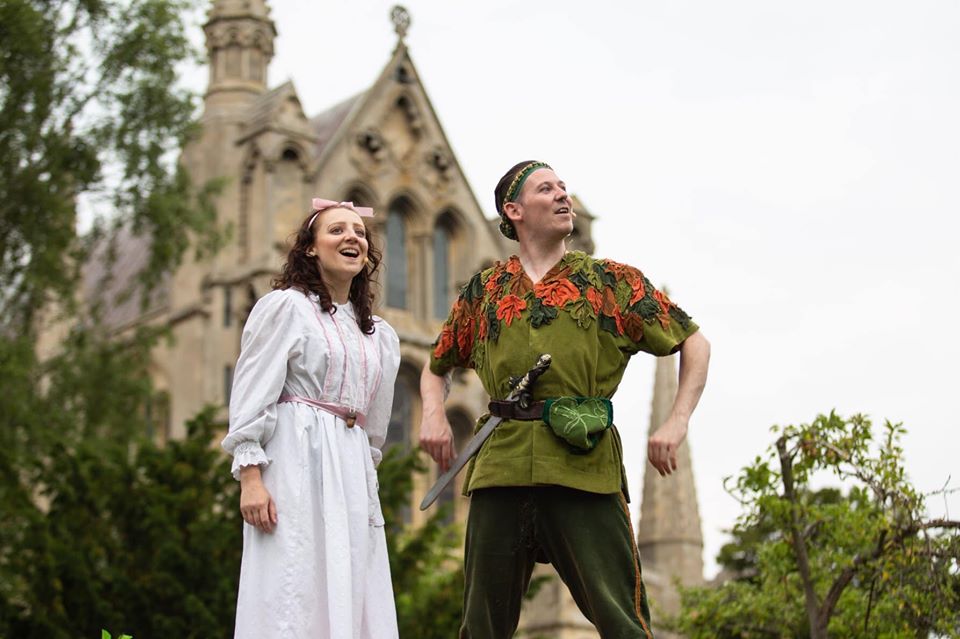 What a magical experience! Seated in the Dean’s Garden, a beautiful garden with Ely Cathedral as a back drop, and with twilight gently approaching, our imaginations were filled with the enchantment of the story of Peter Pan. KD Theatre’s production was just right.

Every character was as good as anyone could hope for. Peter Pan (played by David McNair) leapt, jumped and dashed about the open set stage, crowing with his triumphs and never growing up. Captain Hook (Terry Burns) was a real baddy and his mates were perfect pirates, their voices gravelly and coarse. Starkey (Ashley Shackell) was a credible second in command, scrabbling to follow Captain Hook’s commands. Smee (Oliver Scott) had a walk that was a perfect replica of an old pirate with his body ravaged with arthritis. The antics of some of the pirates during the interval as they plundered the picnics the audience had brought certainly added flavour to events.

Wendy (Lucy Bell) was sweet and motherly, John (Alexander New) and Michael (Jacob Lucas-Adams) were real boys with a love of adventure. Even NaNa (‘The Great Gatsby’), the dog, was real and every time she (or should I say ‘he’?) came on stage, she behaved perfectly.  We knew when she was coming for the audience could not help letting out an ‘ah’ as she walked smartly onto the set.

The Indians, especially Tiger Lily (Holly Dack), with their Indian cries, weaponry and movements brought back vivid childhood memories. The lost boys too were all just as motherless and excitable as you would expect young orphans to be in this wonderful story.

Writer/Director Daniel Bell and the whole production team excelled again! We look forward to their next show.