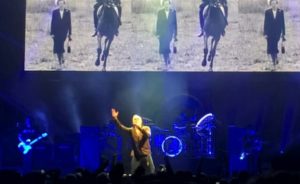 Morrissey was on top form for this sell-out crowd that was only slightly dented in numbers by the Arctic weather – and travelling conditions – outside. It really was a very special thing to see this icon of British individualism and outspoken musicality in this famous and extraordinarily acoustic and visual venue, belt out numbers old and new. These included Suedehead, Wish you lonely, Jacky’s only happy when she’s up on the stage, I started something I couldn’t finish, If you don’t like me don’t look at me, The bullfighter dies, How soon is now, When you open your legs, I’m not sorry – I could go on!

You know you are a true Morrissey fan because only to read out these song titles is to get a shiver down your spine.

Very special moments and the whole 1980s thing with band after band some of us at least present grew up with: Ramones, Sheffield band Human League c1982; Rhythm n Blues classics playing on a 15 yard high screen in front if us with sound as though one  was there.

And that was before the former Smiths frontman came on to towering acclaim from an eclectic crowd of former Smiths fans, post punk nostalgists, new romantics and, yes, Millennials acknowledging the great man for what he is: