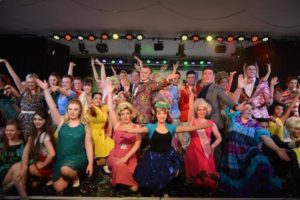 Wow! What a fantastic production by Viva! The musical ‘Hairspray’ swept us up into the world of the early sixties and as the stage filled with teens gyrating to a constant flow of infectious pulsating rhythms, we shared the heightened emotions of a young would- be star, Tracy Turnblad (played magnificently by Zara Minns). Tracy was very keen to get onto a TV show and we shared her trials and tribulations on her journey to stardom and to realising her true strengths as a world-changer.  Jake Overy played her over-sized mother, Edna Turnblad, who forbad her to audition for the show at first but relented as fame beckoned. Mr Turnblad, played by Joseph Beach, was a wonderful contrast. Slim, quirky and full of ideas and comedy these two splendid actors brought the house down with their performance of ‘You’re Timeless to Me’..

In this production more than any other I have seen, the cast undoubtedly thoroughly enjoyed taking part. The smiles were real, the dancing energetic, swift and excellently choreographed (by Jess Clifford).

This production was also packed with many other highly talented performers who were also invaluable to the amazing sound and stage atmosphere and these included The Dynamites, the Nicest Kids, and numerous other characters and ensembles.

The music was first-class thanks to some very accomplished musicians, directed by Richard Hayward. Congratulations must go to the Director and Producer Dan Schumann and his team for such an amazing production.

The next Viva show to look forward to is ‘Grease’ in June/July 2018.