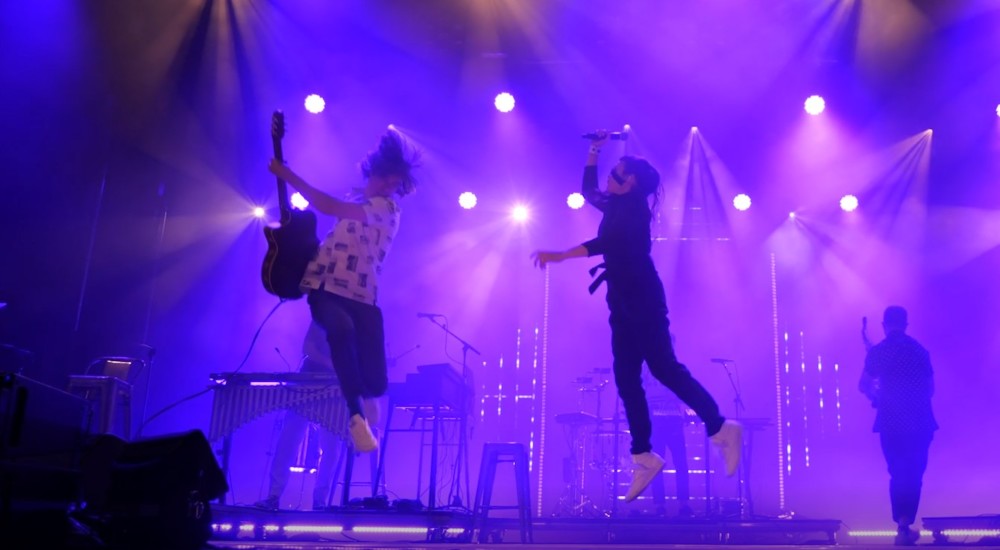 When French band, Caravan palace hit the stage at the Cambridge Corn Exchange the dance floor was already packed with sweaty, happy revellers who had been suitably warmed up by DJ Margaret Scratcher. The show kicked off with their flirtatiously confident singer, Zoé Colotis supported by the highly energetic Charles Delaport playing electronics and double bass; Arnaud Vial on guitar and Paul-Marie Barbier on keyboards and percussion. The mood of their music is happy, irreverent and full of fun. The crowd cheered as their distinctive saxophone and trombone players, Victor Raimondeau and Antoine Toustou also joined the stage adding to the band’s distinctive sound.

This was my first experience of Caravan Palace and also my first introduction to a strange device called a vibraphone, which appeared to be an electric xylophone that Paul-Marie played with a flourish throughout the night. My ‘plus-one’ was my 11 year old son who is a big fan of Caravan Place and informed me before the show that ‘no matter what your musical tastes are you cannot listen to their songs without moving your body – it gets inside of you and makes you feel joyful’. He was not wrong, and I was delighted at the range of music they played, from slightly more haunting songs through to more heavier house tunes that had the crowd jumping like and 80s rave night.

Their main stay is up-tempo, jazz infused, electric swing. The vivacious Zoé is adorably watchable, she is a small powerhouse that gives off great energy whilst delivering whimsical lyrics in her unique vocal style. She worked the room, involving the rest of the band as well as the crowd, even getting everyone singing along to their pop version of the Ram Jam classic, ‘Black Betty’. The band were obviously enjoying the show as much as the crowd, jumping and jiggling, swinging and singing. A male dancer added to the entertainment, showing off his swing moves as well as demonstrating a mean ‘robot’ and joining Zoé in some playful youth culture moves such as ‘the hype’, ‘the floss’ and ‘gangnam style’ – much to my son’s delight.

This was a frolicsome performance that was a pleasure to attend. I can certainly see why they were a main act at last year’s Love Supreme jazz festival and the Wilderness dance festival, as they are a great cross over act.