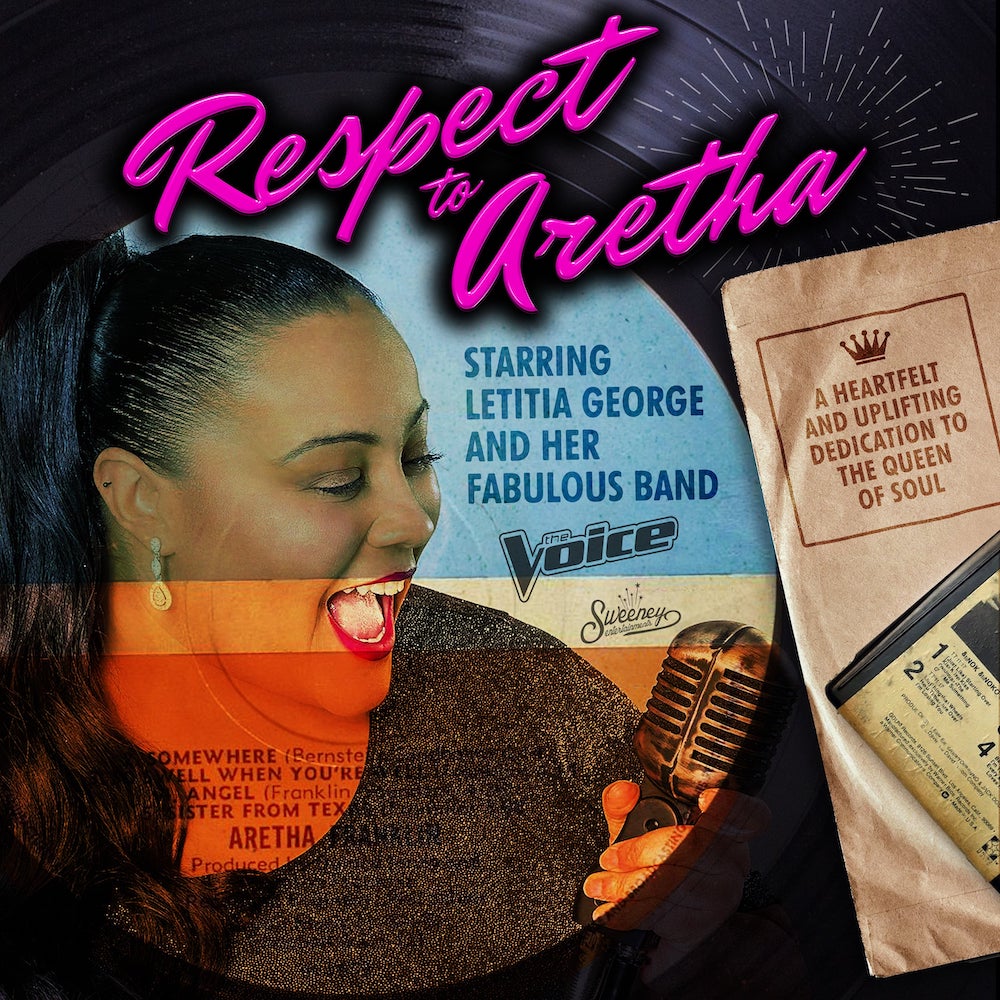 Sweeney Entertainments presents their brand-new concert show, Respect to Aretha in venues across the UK in 2019!
Life-long Aretha Franklin fan and power-house vocalist, Letitia George stars in this heartfelt and uplifting dedication to the Queen of Soul.

Aretha Franklin’s extraordinary career as a singer and songwriter spanned over sixty years. She rose from church gospel singer to international stardom at a young age and is widely accepted as the finest female soul singer of our time. Her talent has always been unequalled. Massive hits including A Natural Woman, Say A Little Prayer, Chain Of Fools, Until You Come Back To Me, Think, I Never Love A Man, and of course Respect, will ensure that Aretha’s legacy will continue forever.

Life-long Aretha Franklin fan and power-house vocalist, Letitia George, rose to the spotlight after featuring on series 4 of BBC 1’s The Voice UK, where she became a member of Team Ricky and soared her way through to the knockout rounds. Letitia also presents the radio show ‘The C Word’ on BBC Radio Coventry every Monday evening, which discusses the issues affecting young people in Coventry and Warwickshire.

Whilst Letitia George will always be remembered for her breath-taking performances on series four of The Voice, she has gone on to forge an enviable reputation as one of the most passionate and hardworking soul singers around. Aretha’s sad passing has inspired Letitia and her outstanding backing band to attempt the seemingly impossible. Very few singers could ever do justice to the Aretha Franklin songbook… but Letitia George manages to capture the very spirit!

Sweeney Entertainments, co-founded by Julie and Peter Sweeney, has been providing a wide repertoire of top-quality touring shows for theatre and corporate events for over eighteen years both in the UK and internationally and now boasts a repertoire of fourteen touring productions. The company saw its busiest year to date in 2018 and now has even more performances on offer, at a growing number of venues, and with the strongest audience figures to date. Julie Sweeney, who has been a life-long fan of Aretha, was one of the lucky ones to see Aretha Franklin perform in New York last year. It had been a lifelong dream to see her live. Julie says “This is my most passionate project in 18 years! I am so delighted to be producing this show. Nobody will ever replace the Queen of Soul but this is our way of paying tribute to the greatest Soul singer of all time.”

Book your tickets to join Letitia and her fabulous band for an evening that fully captures the great music of Aretha Franklin.