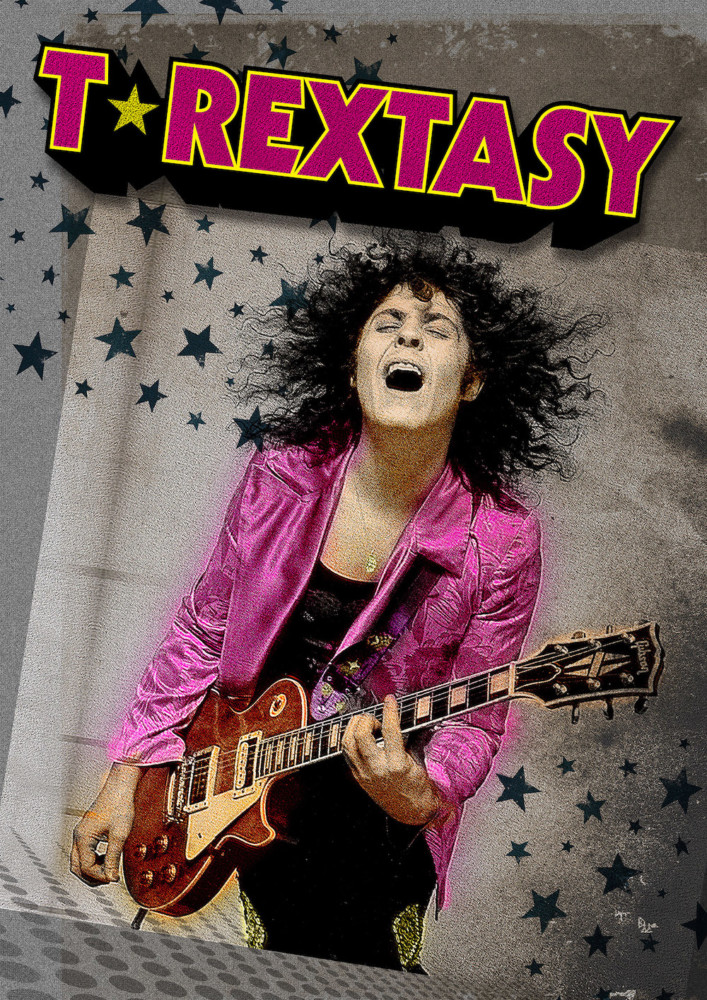 WHY DID YOU FORM T.REXTASY?

“In 1992 I was an original musician who was promised recording deals from various companies, always let down at the last hurdle. I decided to then to form T.Rextasy, to go out playing the music of Marc Bolan – an artist that I had always loved while growing up through my teens and older. As Marc died in 1977, I wanted people to experience the energy, excitement, and the wonderful songs and performance that he gave – always 100%. It was this that drove me to push the band as far as I could.”

DID YOU EVER SEE MARC BOLAN/T.REX LIVE, AND IF SO, HOW DID IT COMPARE TO YOUR CONCERTS?

“Yes, I saw Marc/T.Rex four times, twice in Germany, in 1972 and 1973 (my dad was in the Forces, so my family was based there for a few years), and then twice in England, in 1976 and 1977. Marc’s concerts were crazy – fans screaming and dancing, singing and shouting. They most certainly were not a serene affair. I try and re-create at least an atmosphere of those times, albeit at some venues times have changed and acting in that way is frowned upon! However, I do try to encourage fans to get involved with the gig as much as possible, as it’s a rock’n’roll gig after all. My costumes are based on Marc’s originals, and as I own some of his original clothing, I have been able to get some things made very close to them. We play, as Marc did, 100% live, raw, and raunchy, just how T.Rex would’ve been back in the day – this is what makes the experience exciting. A few years ago, we even had an original member, Dino Dines (Marc’s keyboardist) join the band, until his demise. I think having original members join a tribute band says a lot for our credibility and us as a live unit, not to mention receiving endorsements from Marc’s own family, and his record company.”

WHAT IS YOUR FAVOURITE TRACK FROM THE BAND?

“This differs, as it’s not the same as playing a favourite track live. My fave track of all time is a song called ‘Metal Guru’, but playing live could be one of many, let’s say for now it could be ‘Get It On’, as we do a 8min version that encapsulates the single and also how Marc played it live with extended soloing and performance.”

TELL US A LITTLE MORE ABOUT YOUR BAND MEMBERS?

WHAT PREPARATION DO YOU NEED TO DO TO GET READY FOR THE GIG?

“I try to get to each venue in good time as I have a sequence of events that I follow through, such as on arrival I go into my dressing room, unpack my clothing and make-up, and set it all out in order. I then go out to eat. It takes our roadie about 90mins to unload and set up all the equipment, then another 30mins for the engineer to mic up, so it gives us time to chill before sound-check. In the band, we all have our specific sounds that we require in each stage monitor, and after that, we sort out the out-front sound. With our regular sound-engineer, this normally takes only about 30mins, which is great. After sound-check, it’s backstage to sort out my band merchandise, and then I normally play music on my I-Pod which relaxes me while I’m putting on my make-up and change into stage clothing. Then I go to side-of-stage to check the tuning of all my guitars, then believe it or not, the time has disappeared and it’s showtime!!!”

WHAT CAN AN AUDIENCE EXPECT FROM ATTENDING ONE OF YOUR CONCERTS?

“Excitement, enjoyment, singing along and boogieing, clapping, shouting…and I don’t mind if fans call out for a song, as I usually oblige them by singing a couple of verses to them if it’s a track that’s not in the actual set. A bit of heckling doesn’t go amiss either, as one-to-one contact with the crowd gives the evening an extra special kick!”

WHAT DO YOU ENJOY MOST ABOUT THE PERFORMANCES?

“I absolutely love playing the songs of T.Rex. It’s the actual buzz one gets of going on stage and giving the audience a live experience. Fans are coming to have a good time, and when I see people smiling and doing just that it makes it really worthwhile. I also love plugging my Gibson Les Paul into that amp and giving it some. There’s nothing like it!”

WHAT HAS BEEN THE HIGHLIGHT OF YOUR CAREER SO FAR?

“Too many to mention here, but here’s a few; Playing Wembley Arena – we did that 3 times over the years, and as it was Marc’s biggest gig in the UK, it was a double-whammy for me to play there too.

Obtaining a major record deal with Columbia Records, and releasing a couple of albums in Japan (‘Trip and Glide’, and ‘Savage Beethoven’), which in turn, enabled us to tour out there twice, and on the second tour meeting up and chatting with David Bowie.

Obtaining a publishing deal to write my autobiography and my life with T.Rextasy. I think I was the first guy in a tribute band to be approached by a publishing company to write about my life, which I was nicely pleased about – the book is called ‘The Spirit of Marc Bolan’ (Wymer Publishing).

Being called up by Marc Almond (Soft Cell) and recording a single with him called ‘Death of a Dandy’ and then having it produced/mixed by the legendary Bolan/Bowie producer Tony Visconti.

Through the years gaining the credibility from major original artists and having them appear as our guests on stage, and being on the bill with some of them as well – too numerous to mention, but they include Marc Almond (Soft Cell), Tony Visconti (Bolan/Bowie/Thin Lizzy producer), Slade, Roy Wood (Wizzard), Alvin Stardust, Shakin’ Stevens, Steve Harley, Glen Matlock (Sex Pistols), Boy George, Holly Johnson (Frankie Goes To Hollywood), Howie Casey (Paul McCartney Band/Mott-the-Hoople), Gloria Jones (Marc’s girlfriend), Rolan Bolan (Marc’s son), The Sweet, and oh, so many others….

There are many other highlights as well, but that could well be a book in itself..!”