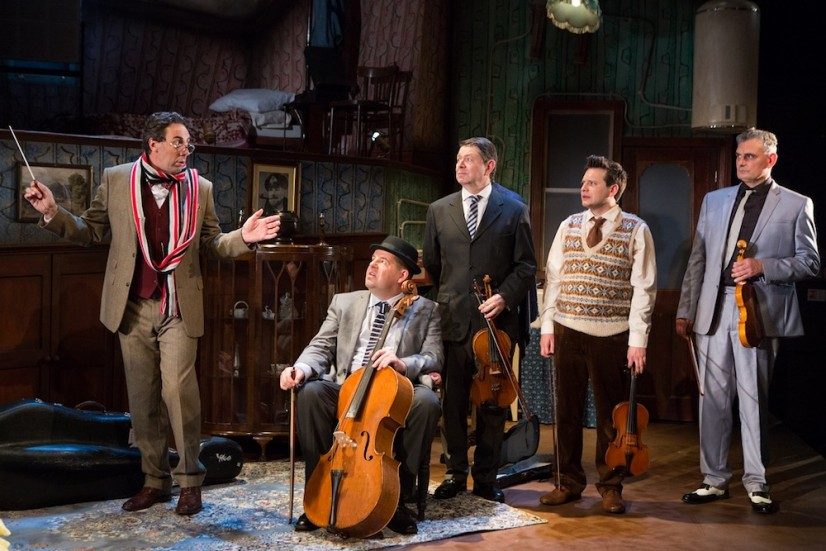 The Queen’s Theatre Hornchurch is excited to be co-producing a new side-splitting adaption of the much-loved Ealing classic comedy, The Ladykillers, which runs at the theatre from 3 – 21 October.

The farcical production has been written by Graham Linehan who is best known for penning the hugely popular TV sitcoms Father Ted, The IT Crowd and Black Books. Based on the 1955 film of the same title featuring Alec Guinness and Peter Sellers, this exuberantly inventive play features a captivating and ingenious rotating set.

When Mrs. Wilberforce puts a sign in her newsagent’s window advertising ‘A Room to Let’, she’s delighted when the mysterious Professor Marcus proclaims it perfect for rehearsing his unorthodox string quintet. She soon discovers that she is not making tea for a motley band of musicians, but harbouring a hardened gang of criminals and conmen planning the great Kings Cross Train Robbery!

Mixing slapstick and criminal capers to hilarious effect, The Ladykillers is a light-hearted piece of theatre that guarantees audiences leaving with a grin on their face.

Following the success of the co-production of smash hit comedy, Worst Wedding Ever in March, the Queen’s Theatre Hornchurch is excited to be working with The New Wolsey Theatre, Ipswich and Salisbury Playhouse again to co-produce this new stage adaption of The Ladykillers. Each tour venue will also be featuring a chorus of ‘older ladies’ from their own communities, who will play the friends of Mrs Wilberforce in Act One.

The Ladykillers runs at the Queen’s Theatre Hornchurch from 3 – 21 October. Tickets are £18 – £29 with £10 tickets available for under 26s at certain performances. For more details and to book, call the Box Office on 01708 443333, visit the theatre in person or go online at queens-theatre.co.uk.