Ahead of the Laurence Olivier Award-winning musical featuring the songs of Madness coming to Hastings for one week only, local boy Suggs has answered questions on the production and on his special connection to the town.

Full Q&A is shown below and highlights include:

A Sliding Doors type story from TIM FIRTH – the writer of smash hits Calendar Girls and Kinky Boots – audiences can expect a truly feel-good night out. Starring DEENA PAYNE (Emmerdale’s Viv Hope) and GEORGE SAMPSON (winner of 2008 Britain’s Got Talent) and set to a score of Madness hits including It Must Be Love, House of Fun, Baggy Trousers, and Our House, this hilarious, high energy musical will have you singing and dancing in the aisles.

On the night of Joe’s 16th birthday, a split-second decision forces him to choose between himself and his heart. As two very different paths unfold before him, the consequences of that choice will change his life forever.

When you first launched Our House in 2002 did you ever imagine it would still be playing to packed houses?

I couldn’t imagine it’d still be playing, not really, but anything is incremental. I remember when we did a gig with Madness way back when and 40 people turned up and I remember thinking we’d made it then. But it’s a real privilege in the same way it is for Madness to still be playing. It’s a real privilege that people still love the Our House musical. I’ve been to see a few musicals recently and some really good ones, but I don’t think many of them are better than Our House. [Laughs] So, in answer to your question, no – I’m not surprised it’s still going.

Did a Madness musical feel like a good fit?

Yeah, we’d been talking about it for some time. We weren’t unaware of the fact our songs are quite narrative and we’d even sort of dabbled ourselves with the obvious – you know, we wrote songs about going to school, we wrote songs about your first girlfriend, we wrote songs about living in the house in the street you were brought up in. But we found it much more difficult than we realised and that’s when Tim [Firth, the show’s writer] got the phone call. It’s a very different discipline to writing songs and writing albums. We always tried to write albums that had some sort of narrative arc, for want of a better pretentious phrase, but to try and fit that together into a story that actually made a lot of sense… I always remember Tim saying right at the beginning ‘I don’t want it to feel like we’ve dropped the songs into scenes just because we need a bit of music, I want the songs to drive the story and we shall make the story fit around those songs’. It was a really incredible process to watch unfold.

Is there anything of you in the character of Joe Casey?

An interesting thing that Tim did is that he spent quite a lot of time with us, just hanging out – I couldn’t even say interviewing us but just hanging out and chatting as he was starting to advance this idea. If you wanted to know anything about Madness you’d do what Tim does, which is listen to the songs. The interviews we did were pretty much irrelevant compared to the amount of truth that’s in all those songs. There is stuff about going to borstal, there is stuff about stealing things, there’s still about love, there’s stuff about happiness and sadness and pathos basically. So I feel there a bit of me in Joe and I feel there’s a bit of every member of the band in Joe because the whole story of Joe is that you’ve got all these choices and crossroads coming along the way and we all had those in our band.

How do you account for the success of the show?

[Laughs] Because it’s brilliant! I’ve been to see a lot of shows and I’ve seen a lot of shows by pop bands, which will remain nameless, where you can really feel the songs have been dropped clumsily into scenes because they were hits. With Our House there’s so much depth, so much intensity, so much pathos – which is a word I learnt from Neil Tennant and which, by the way, means happiness and sadness in equal measures, I’ve now discovered. It’s also a very human story and a very real story, which I think is difficult to do. Well, I don’t know if it’s difficult to do in a musical but I haven’t seen very often in a musical reality in that context that I think Tim got in Our House.

How does it feel when you’re in the theatre seeing audiences have such a great time?

It’s extremely moving. For us, it’s not like we’ve never had a good reaction to our music before being performers but to see it in that context was really moving for us for sure.

All the songs in the show must be dear to your heart, but do you have a favourite reinterpretation?

When the show actually opened it did seem seamless and it’s hard to separate them now because there are so many that cross over. There are four or five times in the show where songs cross over and it’s almost unnoticeable to somebody who wouldn’t know those songs but it happens a lot. It Must Be Love is a great one, where there’s narrative while the song is playing intercut between the boy and the girl. It happens a lot and I couldn’t say there’s a favourite for me. There’s a lot of great moments of that.

We hear the show has been performed in prison…

Last year my daughter was involved in a charity called The Pimlico Opera and put on shows in prisons and she suddenly announced to me, unbeknownst to me, that they’d put me up because they said they wanted to do a version of Our House. So I was in Belmarsh, in the young offenders’ prison, for six weeks working with a lot of kids who have never obviously done anything like this before and have very rarely been encouraged to do anything in their lives. And they’re thinking ‘A musical? What am I doing here?’ The first couple of weeks we’re literally just trying to convince them it was worth even trying, you know, because they felt like they were being shown up in front of their mates. But by the end of it, you know, their families and themselves were really moved by the whole thing, which I thought was the greatest compliment to the show because these are kids who are in prison and this story is about making the right and wrong decisions in your life and they were moved by it. And that was the most moving thing, for me, that ever happened to me within the process with this show.

Have you appeared in the show yourself?

Yes, I have appeared in the show myself. I played the Dad for a month or so, who is a kind of ghostly character who looks down on what’s going on around him and is trying to give his son Joe some direction about the fact his own life went completely wrong – which is a very bizarre feeling for me because I was the father of a lot of these songs and I was trying to direct them to go in the right direction and lo and behold they did. As for appearing in the show, it’s a very terrifying experience and a very humbling experience. The discipline of being in a band is very different. The discipline of being in a band is arguing about what trousers you’re going to wear, smoking a few fags, then going on stage. The discipline of being in a musical is rehearsing for months on end, twisting your ankle and being told you still have to go on stage anyway. And every afternoon being re-directed by the director over the slightest mistake you made the night before. It’s a constant reach for perfection every night and a very interesting discipline, then still within that keeping the joy and feeling of the whole thing. It was a very interesting process for me.

Do you have any advice for the actor playing the role of Dad?

Be yourself is the obvious thing. The Dad character is one of the more kind of relaxed parts really because he is separated from everything that is going on and he’s just trying to give out advice, pretty forlornly actually. So I think it’s a try-and-be-yourself kind of part.

How does it feel to be called a national treasure?

Cor blimey, that’s bizarre, isn’t it? I think it would only really work for us if they put us on the empty plinth in Trafalgar Square dressed as clowns.

And we just have to ask, growing up was your house in the middle of your street?

[Laughs] The one I’m living in at the moment is, yeah, because it’s much more difficult to burgle if you’ve got a house in the middle of the street. You’ve got a lot of back gardens to climb over. Bit of good advice for you there if you’re looking to buy a new house.

With this new tour, what do you hope audiences will feel when they leave the theatre?

I do believe – and it’s another cliché but it’s true – that it is the sort of show where there’s so much going on it’s hard to take in the first time. You can watch it and enjoy it and listen to the songs and do all that stuff you do with any musical, then you can go back and you get another layer and another layer. I’ve watched it a lot of times and I’d say we get asked 20 or 30 times a year if people can put on amateur productions. I try and see a few of them if I can and, a bit like Tim says with my songs, I never tire of seeing the work that he’s done with our songs. It’s got endless depth, I think.

The show is playing at Hastings, The White Rock Theatre. Does the venue or region have a special significance for you?

It’s a lovely theatre, a very nice old seaside theatre. I was born in Hastings so I’m held in some esteem down there and it’s just one of those beautiful theatres, overlooking the sea, perfect for a good night out.

Book online 24 hours a day and print your tickets at home: whiterocktheatre.org.uk

Concessions: £2.00 off (excluding Fri and Sat evenings on top two price bands only)

Prices shown are inclusive of any applicable booking fee. 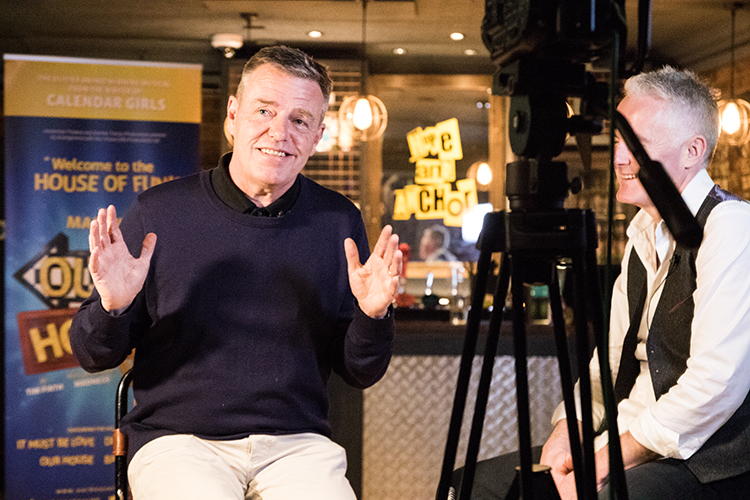