A CONTEMPORARY MAKEOVER FOR A HISTORIC BUILDING

For those of you who may remember the pink building, this may come as quite a surprise… 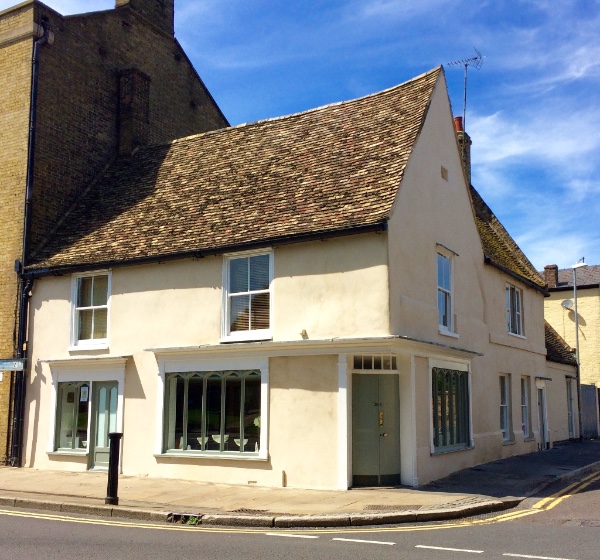 The first half of this year has been taken up with major renovations. The building has been re-rendered and painted in ‘Stony Ground’ which seemed doubly appropriate as the architect at the then Abbey, John Mepsale, lived and worked here in the 14th century. Mepsale “was allegedly responsible for the smaller, western octagon at the abbey in the late 14th century and was certainly the mason for the Porta or south gate built c.1400.” (Maddison, 1998)

All this work has given the Studio and Gallery a much lighter, fresher look. During the course of the works, a stone was discovered under the old render on the gable end with the initials of the builder dating that part of the building to 1658. This confirmed the findings of a survey undertaken by Historic England last year dating the majority of the Grade II listed building to the 17th century. Layers of history have been unfolded which has been very exciting.
Weekend Paperclay Courses

The studio has been reorganised ready for weekend paperclay courses which I shall be running in September and October to introduce more people to this exciting medium. The courses are now almost fully booked with several international attendees but one or two places remain, so do take a look at the Courses page on www.angelamellor.com.

Forthcoming Exhibitions
Now that the building work has finished I am back in the studio busy preparing for a number of exciting shows starting later this year.

I am very pleased to announce that my ‘Coastal Light’ bowl has been chosen by the jury to the Exhibition of the Fifth International Triennial of Silicate Arts.

This year’s theme is “Balance” which perfectly fits my kinetic Bone China bowl. Seaweed paperclay textures and corals have been incorporated into a hemispherical form which rocks with gentle rhythmic movements finding its own balancing point.

The Triennial takes place in Kecskemét, just south of the Hungarian capital, Budapest. Kecskemét has long been renowned for its support of cultural events and has a long tradition of artistic endeavour. The Triennial Exhibition will take place in the Hírös Agóra Cultural Centre from September 3rd to 30th.

This year you will also be able to see my work at Byard Art in Cambridge in its ‘Seascape’ Exhibition from September 7th to October 1st.

I am delighted to have been invited to exhibit in this beautiful, light and spacious gallery by a former student of mine who teaches at the College.

Next year I am looking forward to a major exhibition alongside Lee Madgwick at Byard Art in Cambridge, September 6th to 30th, 2018.

Do call in if you’re ever passing this way, you’re always welcome to come and see the building’s new look… and my work, too.

Now I must close as the studio is calling: I must get ready for all these exciting events!