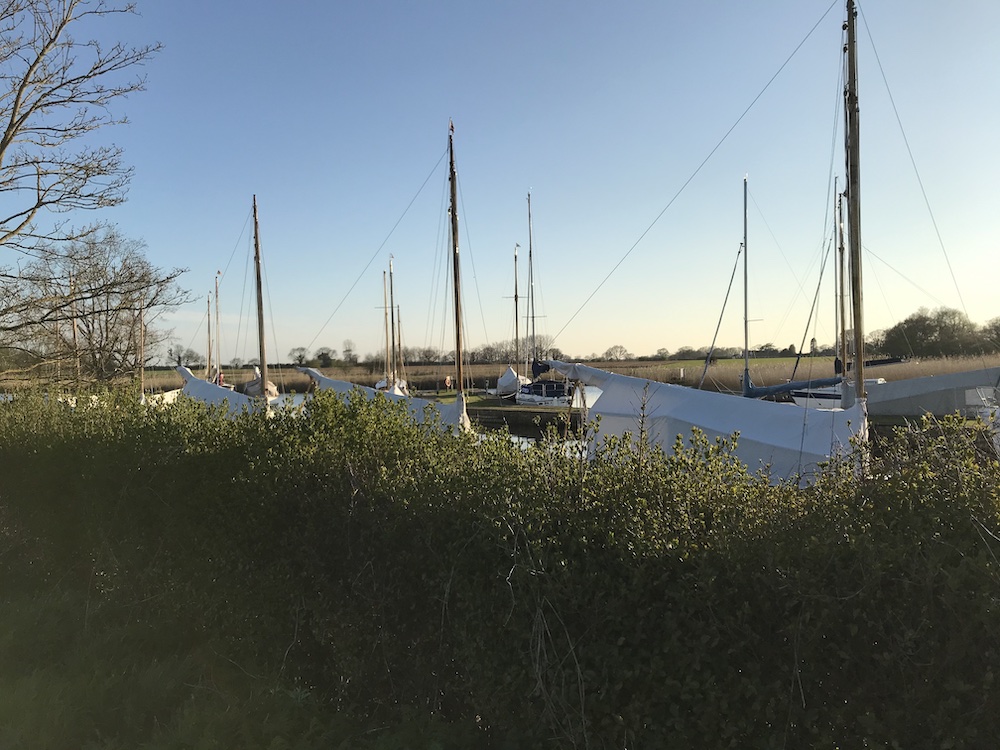 For nearly a century Percy Hunter’s fleet has been recognised as having the finest sailing yachts on the Norfolk Broads. Their designer had a rare genius, and now they are back for hire as the wetlands of Norfolk open up. By John Giles and family

Sailing a Broads classic sailing boat is for many the essence of sailing on the Norfolk Broads. Older photographs of the Bure and 11th-century St Benet’s Abbey show the same picture now as in April 2021 when we took Lullaby class boat Lustre out for a two-night spin.

Hunter’s fleet was founded by Percy Hunter with his sons Cyril and Stanley when, from 1932 to 1949 they built the yard at Ludham with 14 cabin yachts. A team from East of England Online was primed to take out a Hustler yacht in April 2020, but for pandemic reasons this was shelved and we had to pinch ourselves to realise it was happening now. 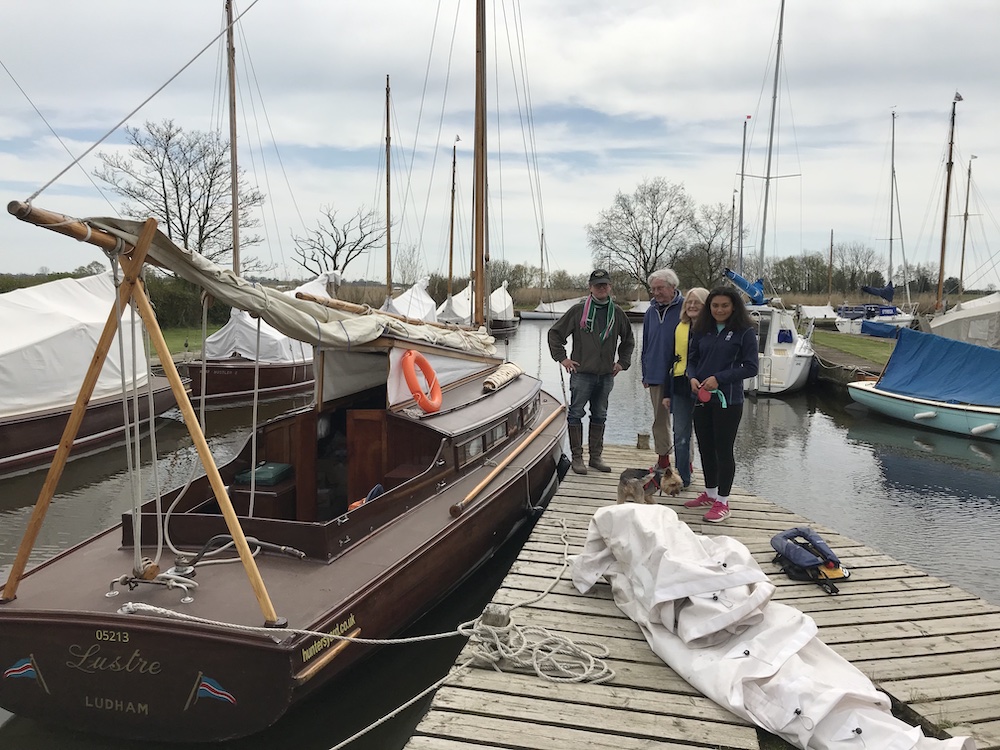 We turned up at the end of the third week in April with high pressure systems giving the frostiest April ever. This meant that inevitably it was cold at night, however this did not harm the uniquely East Anglian enjoyment of getting back to grips with these boats.

Our arrival at the yard in Ludham, east of Norwich, was in sunshine and with everything set out for a good sailing day as there was a keen and cool north-north-westerly sailing wind. Vikki and Ian soon had us set for the day and fitted out at the yard, also home to the Norfolk Heritage Fleet Trust. Ian was full of experience and had a small team under him expertly moving boats around with the touch of a tiller.

We set off into Womack Dyke and then the history of the place hit us. As well as the natural history, with herons, ducks and ducklings, divers, moorhens, swans, grebes, and fish jumping out of the water. 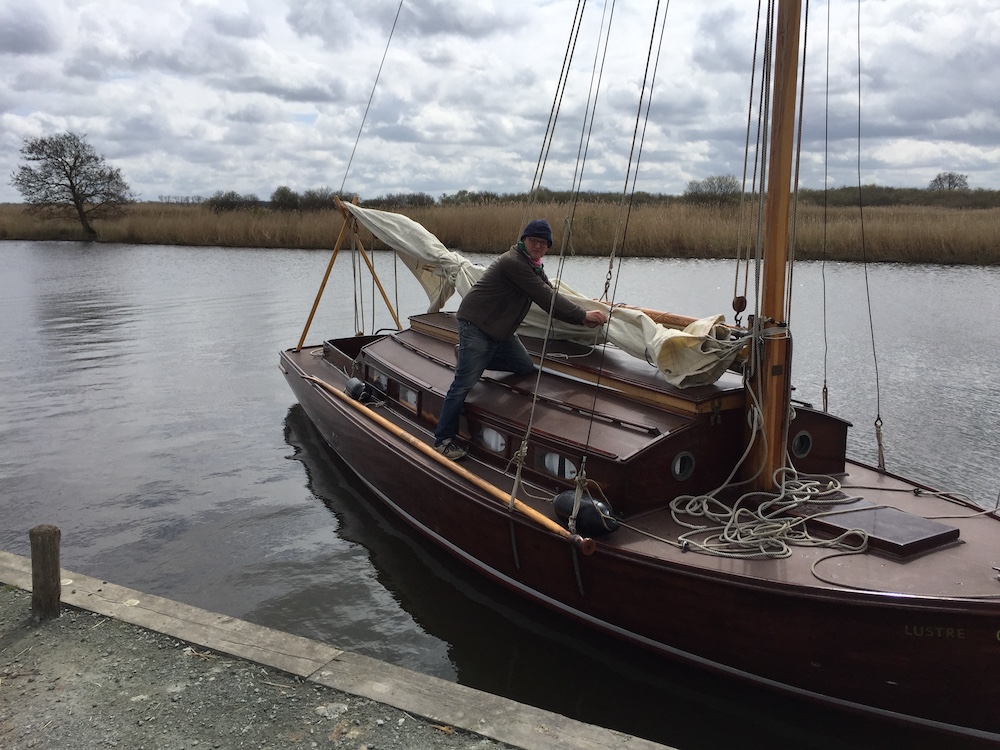 The secret of boats like the Hustler and the slightly bigger Lullaby/Lustre may be the long flat stern which means the boat can swing round quickly onto a new tack without losing momentum against a headwind in narrow waters. But whatever the reason, tacking in a Hunter boat without the chore of working jib sheets (for the jib has a small swinging boom of its own) can be totally absorbing and exciting. It is satisfying to creep up on a reedy corner on a lee shore close to the wind to gain maximum advantage and avoid having to take a further tack. It doesn’t always work, and then you find the extra comfort of Broads sailing which is that contact with reed-beds and grassy banks is normally harmless to boats and sailors, leaving aside wounded pride. 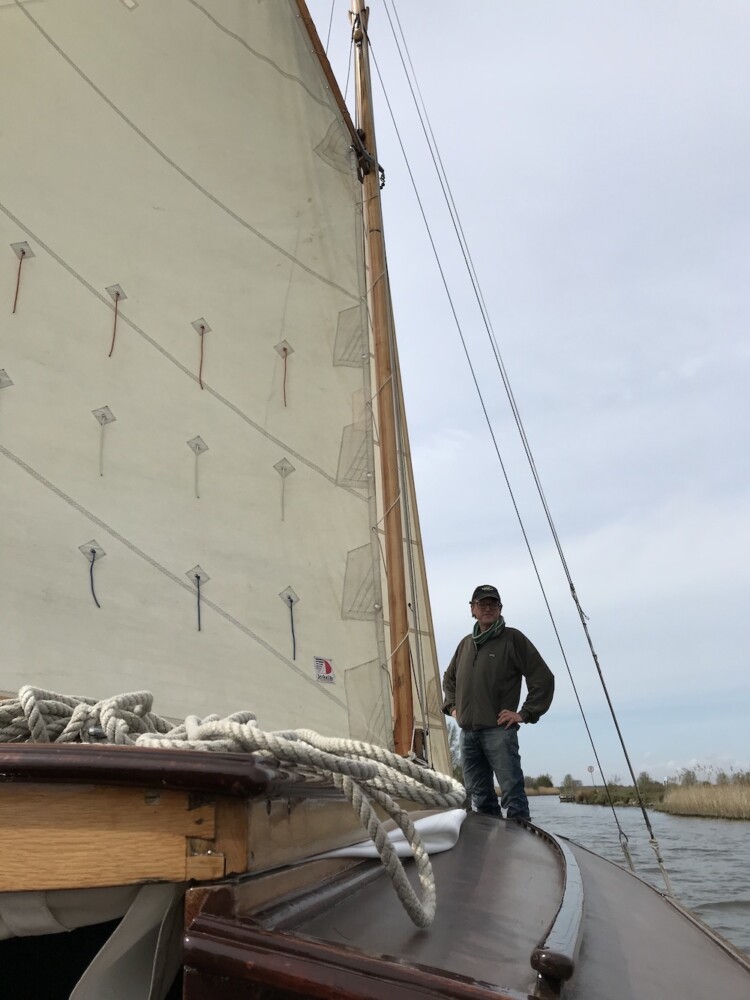 The boats are magnificently maintained, with ropes, sails and varnish all in first-class order. The electric engine works well and is simple to use.

We headed down the River Thurne to Thurne mouth where like so many others before, we took a right into the River Bure. Broads we visited were inevitably South Walsham and Ranworth, which did not require lowering the mast. 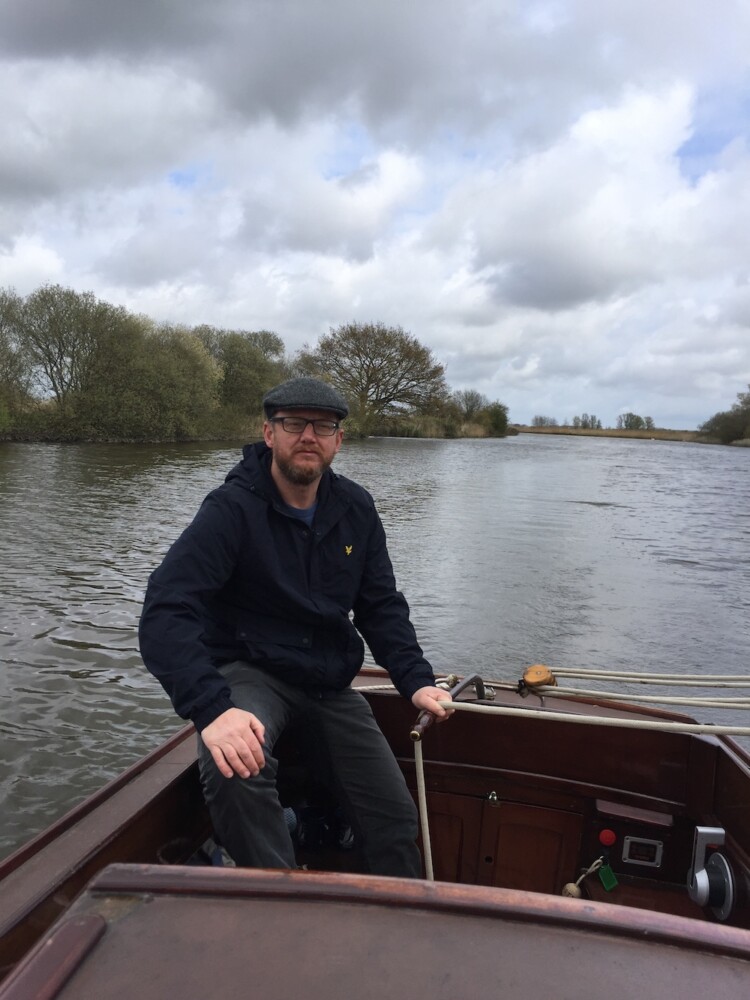 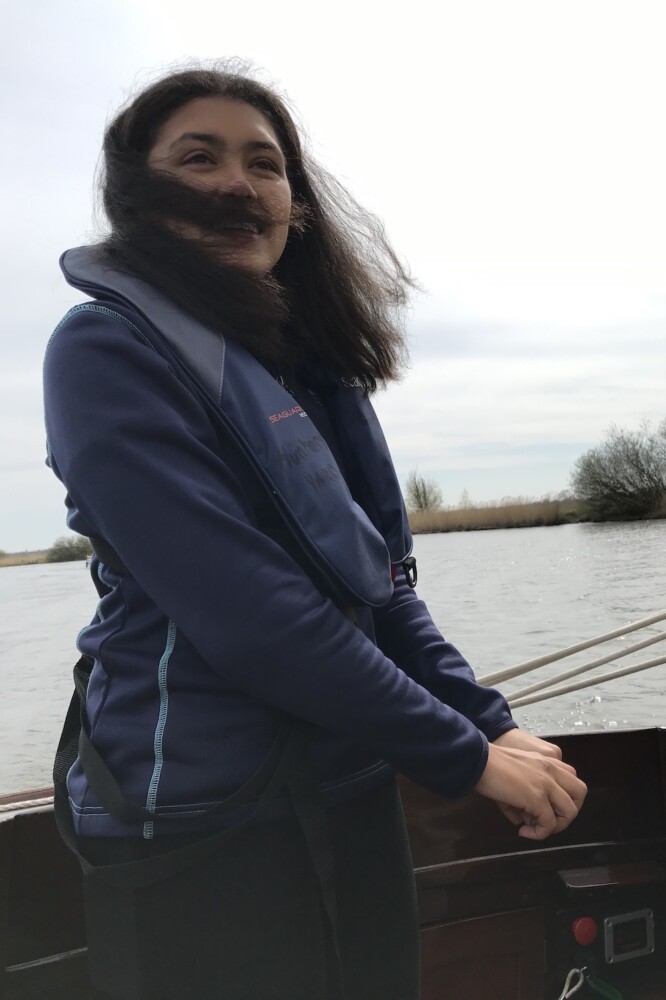 These boats are old-fashioned compared to the gleaming motor cruisers of today, but to experienced sailors they bring out uniquely the charms of the Norfolk Broads. They really are Heritage Yachts.

One caveat is that whoever is skippering such a boat must be reasonably experienced. You also need to be sure-footed and to have one or two people on the boat who are physically strong enough to handle the sails and lower and raise the mast.

The challenges are quite different from sailing at sea on coastal waters. On the other hand one learns quickly in an environment which is spared the main perils of the sea. And for learning to sail there is no better place than the open waters of Wroxham or Hickling Broads. Or Barton Broad, as indeed Nelson did as a boy. And with so many learners afloat, mistakes and disasters are always happening, but are mostly kindly viewed!

The Broads are a national institution and associated with many with happy holidays, pubs, sun bathing, free mooring etc

At one point some lads on stand-up boards on the bank played appropriate music when we had our own encounter with the lee shore.

After John and Jill departed late Saturday, and a night spent back at Hunter’s with Chloe and Pippa, William joined Henry on Sunday for the second day of sailing and night 2. William wrote:

“For a fairly imposing boat and being someone with very little sailing experience, she was actually surprisingly tactile and easy to handle – although probably not one for a solo ride unless you had the flexibility of an octopus when hoisting the sails. Having said that, I largely stood and watched.”

William had one major handicap which was that he was not told to look for wind direction at the burgee. “I thought it was a mystical sailing vibe thing.”

Henry’s favourites? Apart from the atmospheric nomenclature of the Broads with terms like – quant [the long pole for pushing off the bank], fenders, tabernacle [the mast housing], transom stern, timbers and topping lift. Oh and ‘slipping to the bank’, a highlight was actually on dry land – just the surrounds of the yard at Ludham. On the Sunday morning, walking behind the boat sheds and up a small but ancient farm track. A footpath led out to the south along the dyke, where three motor boats had moored for the night and dog walkers were emerging. And swinging round into the rising sun and the silhouette of an ancient windmill, like an upturned yoghurt pot in the fens. The cry of new arrivals from the Russian arctic winging overhead. It was paradise after long months shut inside and we plan to return. 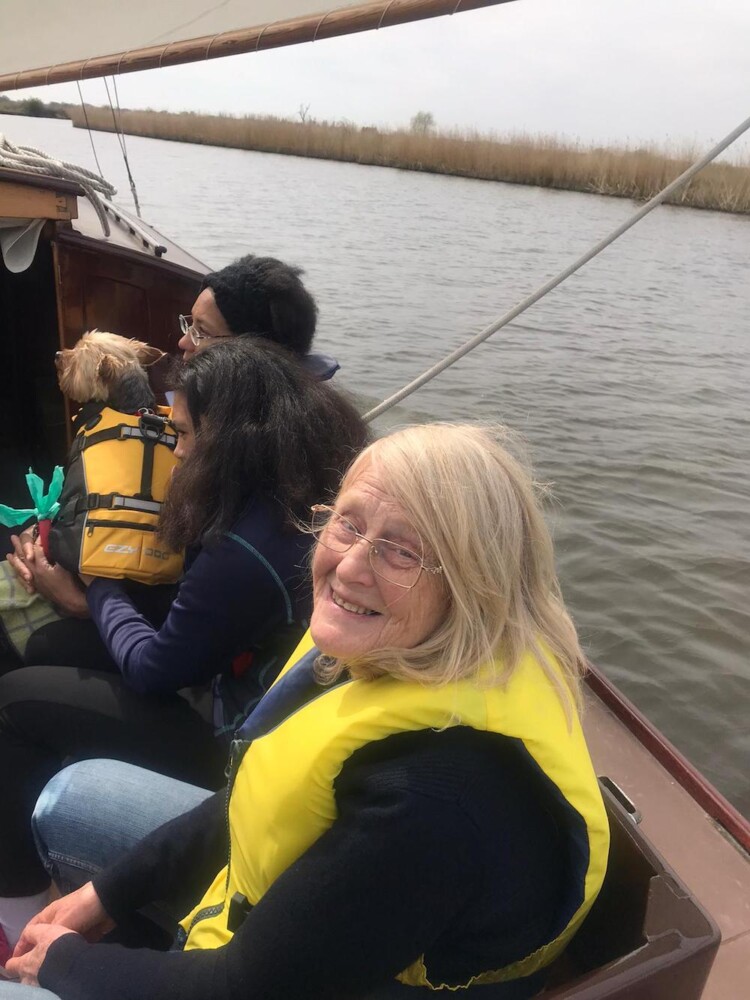 The last word goes to Jill:

“That was a perfect day.  We both loved being on the Broads again – John felt it had given him something which was missing in his life. I was surprised to find myself revelling in the beauty of being in that setting, with the reeds and the great sky and being on that fine boat, so carefully cherished over the years.” 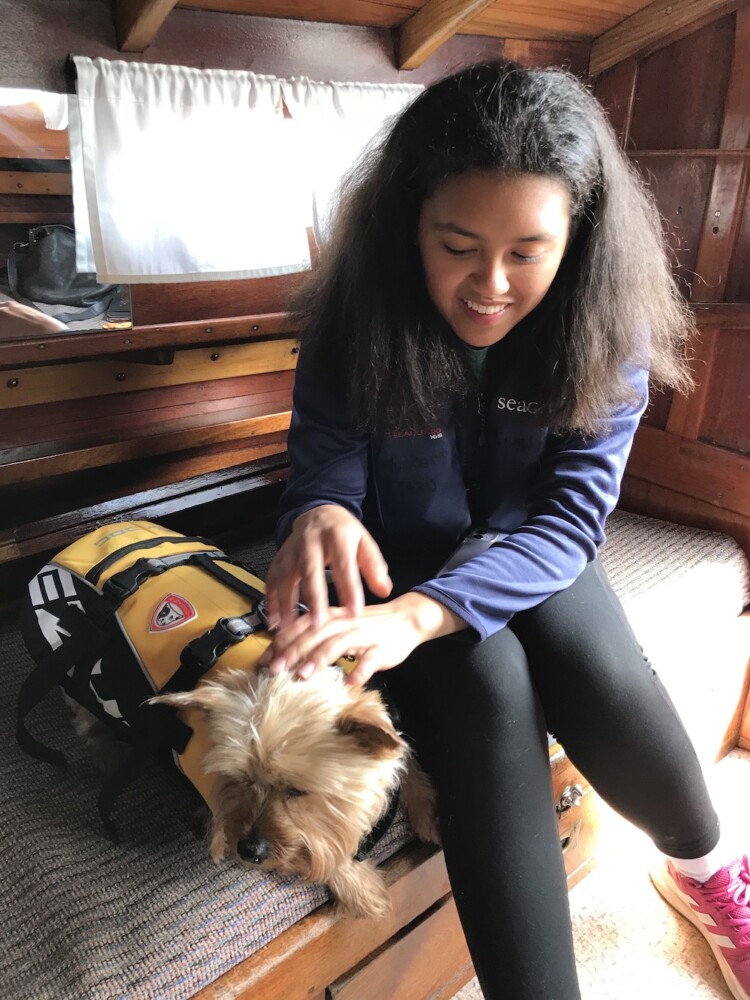 Sailing boats including half deckers can be hired out from Vikki Walker and there is a two-tier pricing depending on the time of year. Different numbers of days (nights) can be worked out. Discounts are available for Sailing Clubs and Youth Groups. Children and well behaved dogs are welcome. 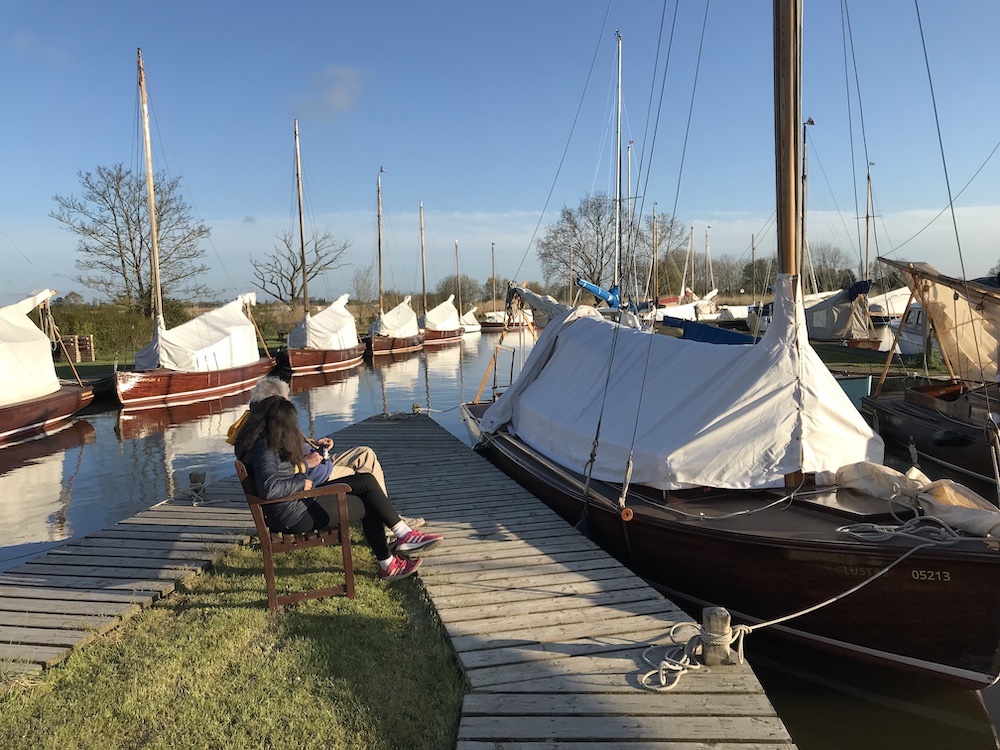