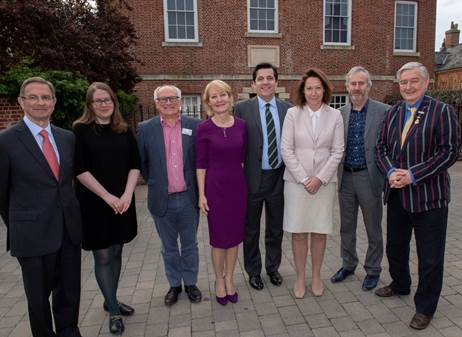 The National Heritage Centre for Horseracing and Sporting Art at Palace House kicked off Guineas Weekend in style with the launch of their new exhibit of works by celebrated animal painter, James Ward. The stunning Packard Galleries situated in Palace House provides the perfect backdrop for the celebration of James Ward which opened to the public on Friday 4th May and will run until 28th October 2018.

To celebrate the launch of this impressive collection, guests gathered in the breath-taking Kings Yard at Palace House for the official opening which was conducted by Hedley Swain on behalf of the South East from Arts Council England and was followed by a private tour around the Packard Galleries.

Director Chris Garibaldi commented: “We are delighted to welcome Hedley Swain, Area Director, South East from Arts Council England to formally open our latest special exhibition James Ward: Animal Painter here at Palace House. Our sincere thanks must also go to Tate Britain, the British Museum and Fitzwilliam Museum for allowing us to show their paintings here in Newmarket – as well as those private lenders. I would like to congratulate Alison Wright our guest curator who has worked so studiously on drawing this wonderful exhibition together. Alison’s role as a doctoral student at the University of East Anglia and Tate Britain evidences our commitment not only to bringing lesser known sporting artists to the attention of the visiting public but to nurturing talent and supporting individuals at the beginning of their curatorial careers”.

Brought together for a rare viewing, are paintings including the artist’s arresting Fight between a Lion and a Tiger (1797) on loan from the Fitzwilliam Museum, Cambridge and View in Tabley Park (1813-18), on loan from Tate. Additional works on display will include a series of delicately rendered drawings demonstrating Ward’s precise draughtsmanship, on loan from the British Museum and a selection of the renowned Lithographic Drawings of Celebrated Horses.