Emily Butters goes back to the 13th century to enjoy a Medieval Jousting Experience Day in WarwickIt is not every day you are greeted by a knight.In fact, like they say, this was going to be a real red letter day as I was here at the Knights of

Middle England at Warwick International School of Riding to experience a day of jousting. It promised participants the chance to immerse themselves into the day and into a medieval environment and first, we received a light-hearted and funny intro on the 13th century jousting with an introduction to jousting generally and sword fighting. 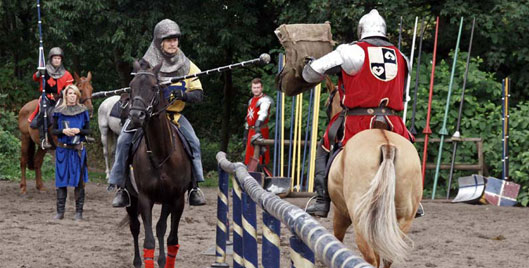 I was among various Red letter days abilities – some had only sat on a horse before but just to really feel I was in a ‘no pressure’ situation (not!) I found myself last on the list – a pro!
We signed some paperwork (signed our life away?!), shoes were checked for suitability, tabard, coif and belts were handed out (we were shown how to make a scabbard with the rest of the belt) and we were ready for the off.

A description followed of the two types of lances used by medieval knights and we were shown how to use them. Next, we were sorted into abilities and eventually, chainmail slid over our heads to really ‘get the look’.

An important point was how to ride the horses in so far as this was different to normal. Familiar with polo and Western styles this is a more relaxed way of riding.

Then we were sorted into 2 teams and marked with horses: we were The Black Adders. While another group went off to start on archery, we were told how to hold reins, manoeuvre the horse and importantly how to stop.

We practised stopping and general riding advice came next and rising trot was explained – and how it helped to keep knees bent, and cantering. 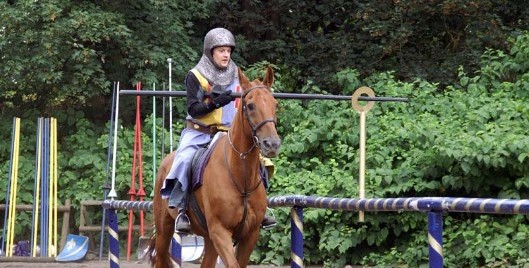 I really enjoyed the experience. We first learnt the ‘Lancing of the Rings’ in a walk and then trot. I loved it and grew in confidence.  Next, we learnt to ‘Strike the Quintaine’ – the man-shaped spinning target!
Then it was halftime and the groups swapped over. This was the sword fighting – foam swords but also real and a complete fight followed. In the afternoon the stakes were raised as the teams competed in the ‘Grand Gauntlett Challenge Competition.’

In the end, there was a team 1 total of 45 points and Team 2 total was 42: Yay!
The Finale included a mini joust each having four attempts to hit a Knight’s shield (Johnny) at the top right corner.

I really enjoyed the day and would love to do the next level, it was real value for money, and a lot is packed into one very full day – highly recommended.

If you can ride, great! But ‘all standards of horsemanship including those who have not ridden at all even on a donkey!’ are catered for.