So if you fancy spending hours of darkness in the middle of a forest in a Zombie Graveyard it’s a good night out. Full floodlights are available but nothing will spoil your zombie apocalypse experience.

Driving north through the sandy breckland and woods of Thetford we saw at the side of the A11 a tank (or APC or similar). We had arrived at Combat Paintball’s Eastern HQ.

Excited noises from the children in the back emanated as we drove quite a long way through sandy tracks to where we were introduced to a well-staffed team. To call it quasi-military doesn’t do it justice. This was a veritable in-the-field army camp, save for more fantastic elements such as life-size zombie militia statues – a nod to some of the games played out here like Zombie Night Paintball (see separate article). 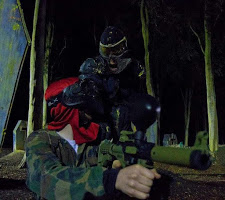 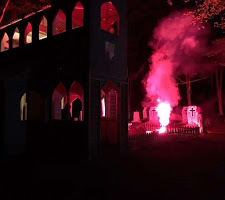 There were camouflaged walkways, practical wooden bench tables to get kitted up at and good facilities but we were here for low-impact paintballing designed with 0.50cal, 60% less than full paintball impact markers. It’s for ages 8+ and we’d brought our three girls (8, 9, 9) and, okay most of the two 25 strong teams were boys.

But also adults were playing (older siblings/parents etc) and when an orange snood, helmet and combat overall were handed to me – plus a mini-paintball gun loaded with 50 balls – I was in.

A briefing followed, excellently delivered and with no questions as to rules and enforcement: if you’re hit you’re out. If you cheat, you’re out.

The games were good fun, held in netted zones, the first a simple engagement of the two sides over terrain with shelters. You get hit sometimes by friendly fire but once out you’re out – but soon get another chance. You advance, find cover and remembering CCF schooldays training (in my case), or perhaps Tom Hanks on the beaches in Saving Private Ryan you peer around, look for a firing muzzle or the fluo of an enemy snood and rapid-fire back. I even tried my 007 ‘roll out while firing’. It worked! I don’t think, sadly, anyone noticed!

The balls have good range and do hit, with quite a thwack. It’s realistic. The guns are good, a nice moment being when I was able to share some of my remaining balls under the suggestion of a marshall with one rapid-firing teammate who’d run out. He was so pleased! 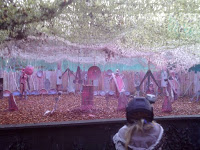 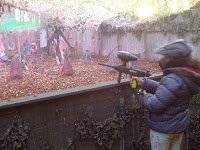 There are breaks: squash and beverages for adults, then, later a lunch break of hotdogs, burgers and jacket potatoes for £2-50 to £3. While on price, sessions are £21.99 with deals for big groups. This for a 3-hour session and 300 rounds.

Finally, it was the churchyard and my orange snood team had to take a defended two-storey church. Pointless from the first round I couldn’t resist an attack and was provided with cover fire offered by a young comrade (a nice moment, cheers mate).

Five feet away from the church I was hit in the arm so had to raise my gun and trudge to the Dead Zone. But you know what? In real war, I’d have carried on to reach my goal and zapped my tormentors! 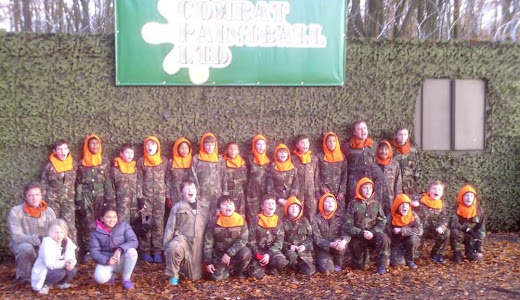 ​​​Did the girls enjoy it? Yes and no. At the younger end of the paintballing age scale, it’s perhaps not surprising they were relieved to pull out after two rounds and enjoy a laser clay session: thanks to Combat Paintball’s staff for looking after them so well.