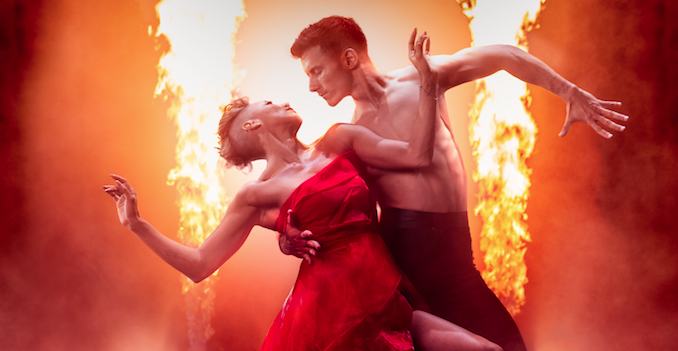 It sounds like something from a fairytale romance.  A couple of fiery Latin kids, each drawn inexorably to dance, one in Venezuela, the other in Spain.  They crave their paths through Fame School in New York and European competitions, before eventually meeting on the biggest dance TV show in the world.  And then they meet, sparks fly and they create their own dazzling dance show, Firedance.

But it’s no fairytale – it’s the real life story of Gorka Marquez and Karen Hauer, that show is Strictly, and that tour is headed your way in 2020.

Gorka beamed: “I always wanted to do this. I wanted to do something different. We knew it would be a great opportunity. Karen and I have been dancing and doing shows for the last year together and we felt like we were locked in. Even as we continue together we have a very good partnership, so whenever the idea came up, we felt like it was a great idea from the click we had already and when we sat down with the shows and the producers to try to create ideas, what we will do, and how we have a vision of what we want to show and share. We realised we just had the same ideas on so much. We want to take on what people have seen and show them it can be even better. There are so many shows right now that we wanted to create something different, something from a different perspective and I think it’s very good that both of us are Latin, we share that kind of mentality and point of view of what we want to show and be more passionate, more fiery, with strength.

It’s all about passion. Not like classic sparkly ballroom, even the outfits, it’s more street fashion with a Latin feel. Less sequins and more fire.”

For Karen too, their shared Latin heritage is the key to the show and its appeal – and why audiences are going to go wild for their flaming hot routines.

She said: “What I love is that we’re focusing on certain dances. Because sometimes, if there’s too many things, then it can kind of bleed too much, it can just get a little bit fluffy but we wanted to focus on those fiery dances. Those dances that kind of get people emotionally and let people know that we really want to show that power, that strength but also the beauty that all of the dancers have within them. We’ve narrowed it down to some specific dances because people really love watching the tango or whatever, because they are dances that are really meaningful and that really kind of connect with people and have that power behind them. So we thought let’s connect to those dances. That’s the ticket right there.”

You might expect those fiery tempers to flare and clash, but it turns out the opposite is true. Instead, it’s been a matter of channelling that fierce passion into the dancing, and creating something truly special.

Karen said: “Not at all, actually, because I guess we both respect each other so much. We’re very temperamental, yes. We know that we’re both fiery, yeah, but I guess the fact that we know that about each other means it doesn’t need to come out, it doesn’t clash, it means we can work together. We’re so invested in what we’re doing. From the music to the costumes, to every single little detail that’s going to be on that stage has come from Gorka and myself. We’re going to have a great team around a great band, great singers, and us. We’re going to be able to input and be across everything that people are going to be seeing so it is very nice to be able to have that access. It’s coming from a place of, of truth. It’s something that we need, that we’re really passionate about. It’s always a plus that you get to put out there what you really want to put out there. I love working with Gorka. He’s such a lovely man and a beautiful dancer who I really look up to.”

Gorka agreed: “As soon as Karen and I started dancing together we were like – wow, this is fun. We were getting on so well from the start. I remember when we met for our first shows. We had to do five numbers and we had them like, in two hours. So we realised, this is a thing you know, when you click with someone, and the ambition, the connection, it was like we were able to see in each other’s brains at the same time. I was gonna say something but she was already doing it. So it’s easy to work with someone like that and it’s enjoyable so then we knew we needed to do something together. We think the same; we see the dance the same way. From the very start it was very, very good and it’s very easy when it’s like that, it makes everything easier and more fun.”

Karen moved to the UK when she landed the Strictly job and that’s where the pair met – and they both love the idea of their show landing international success in their own right.

Gorka said: “I would love to go international with this, there’s not so many dancers who can do that. I would love to be able to go back to Spain and do this show in Spain. All my family are there but the biggest things I have done have been in the UK so to show over there even for a night or two nights to my family and

friend what I have done would be incredible.”

Karen said: “Even to this day I have to pinch myself. Now that I’m in a completely different country and in the best TV show and then I’m going on my own tour with Gorka, I can’t actually believe this is happening. When I got the call for Strictly I fell on my knees and I cried, I hadn’t worked for four months and was living on my savings. None of the dancers that were there then are there now except Anton and myself. He’s the longest running male and I’m the longest running female. I’ve been in it for eight years. It is incredible it really is and a joy to be around. I’m gonna be there until they drag me out. I still can do at least another five to seven years. Gorka and I first met on Strictly, I saw that he loved salsa and he loves the flamenco and those are the dances and I loved as well. But we actually only started dancing together this year. We just clicked; this is the best partnership ever. We get along so well. We choreograph together so well too. We both said I think we should take advantage of this and do something more and see what happened. And all of a sudden Firedance was born.”