Another Winner From the Norfolk Based Family Business!

Today (21st September) Black Shuck are proud to announce the release of their new ‘Ignite Gin’.

At 57.15% abv Black Shuck Ignite delivers a Gin that is outrageously smooth and unapologetically bold.  The ever-present Juniper is balanced with the warming Sea Buckthorn and citrus notes.  Ignite Gin is perfect for sipping.

For the first time Black Shuck will be putting the 35cl bottle of Ignite Gin into a Gift Box and excitingly the 70cl Ignite Gin will be launched in the New Black Shuck Bottle.  Whilst the overall shape remains similar to the existing bottle the new bottle has been embossed to reflect the Black Shuck Brand. 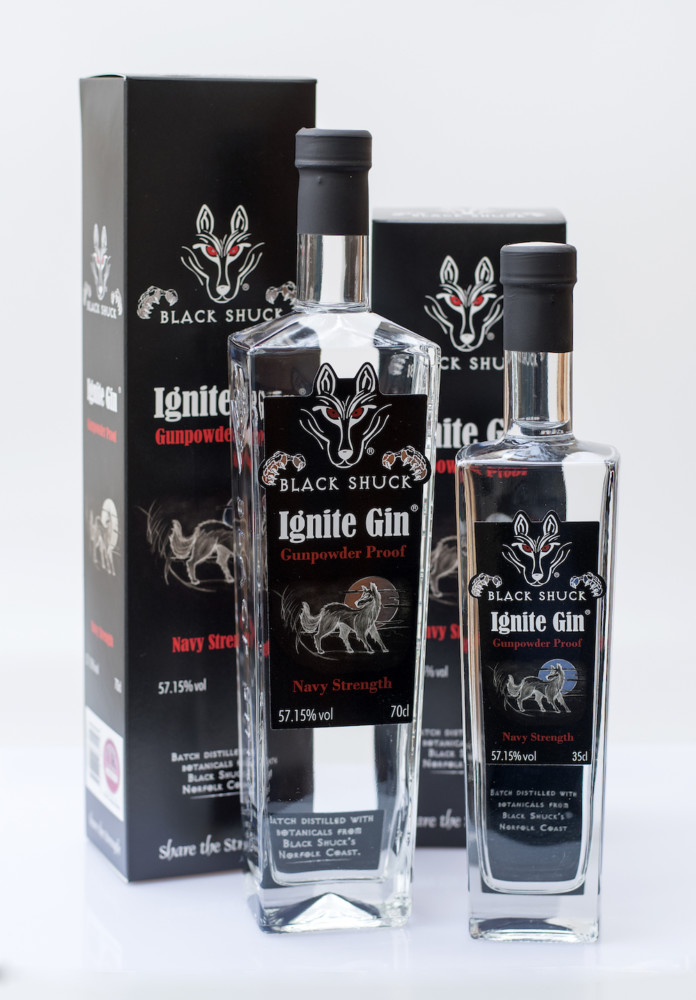 To mark the launch of the Black Shuck Ignite Gin Beers of Europe have a limited edition (Bottle No. 7 of 20) together with a signed and framed Certificate of Authenticity Black Shuck Ignite Gin Collectors Edition to give away.  For a chance to win this amazing gift all you have to do is pop onto our Facebook page https://www.facebook.com/BeersofEurope ‘like’ and ‘share’ and the winner will be randomly chosen on the 1st October.

It is alleged that during the 18th Century Rear Admiral Sir Thomas Desmond Gimlette, of the Royal Navy, administered a concoction of gin and lime to help immunise the crew again illnesses such as scurvy and malaria.  Subsequently, some 300 years ago, legislation was passed requiring every British naval ship to carry on board a quantity of Gin for medicinal purposes.  It has been said the on the call “up spirits” sailors would report to the deck where they would have been offered up to 100ml of spirit (that’s four measures) every day.

The practice of giving alcohol rations to sailors on British Navy Ships continued until July 31th 1970 when at 6 bells in the afternoon the practice was abolished.  It was a an occasion that went down in the history books as Black Tot Day.

With the on-board Gin rations being stored in close proximity to the barrels of gunpowder there was a risk of the gunpowder becoming soaked and rendered useless during rough seas and battle engagements.  However, it was recognized that so long as the spirit was sufficiently high in alcoholic strength the gunpowder would still ignite.  This same principle was used as a method of establishing ‘proof’ by the Naval including food, bedding, candles and course Gin.  To ensure the navy was not being overcharged for watered down spirits the purser would test the alcoholic strength by adding a few grains of gunpowder to the spirit.  If the compound just ignited it was taken as ‘proof’ that the spirit was at the correct strength.  If the Gin was ‘underproof’ it would fail to ignite and if it was ‘overproof’ it would explode with a bang.  It was in 1816 that Bartholomew Sikes invented a hydro meter that measured 100 proof at 57.15% alcohol by volume (abv).  Today the term Navy Strength is used on “proof spirits” that are bottled at between 57% and 58% alcohol by volume.

THE LEGEND OF BLACK SHUCK

Dating back hundreds of years, Black Shuck is one of the oldest English legends. Whilst some recorded sightings claim that the ghostly spirit dog, with its hug red eyes, acts as a protector of lone women walking along the coast paths at night, others firmly believe that the legendary hound is a bad omen.

Not surprisingly, there are probably as many variations of the legend as there are varieties of Gin. Over the years stories were told exaggerated and retold often by smugglers who would encourage fear of the Black Shuck to ensure the public stayed at home whilst they smuggled their illegal cargo ashore.

The Black Shuck Gin story began during the Summer of 2011, when Patrick and Sarah Saunders together with their children Leanne, Nicola and William had a dream to start their own business.  The original aim was to have a family project which could supplement their pensions in the years to come.  Little did they know that 6 years later both Sarah & Patrick would be working on the business full time.

In the Autumn of 2011 many Saturday and Sunday mornings were spent gathering sloes in a quest to make the best Sloe Gin ever to be tasted.  No less than 15 trials were then started, each using different amounts of each key ingredient.

It was in the Autumn of 2012 that the whole family attended their first event with an opening stock of around 300 bottles of Sloe Gin and 100 boxes of Sloe Gin Truffles.   By the end of the afternoon they had received numerous compliments and sold several bottles and truffles.

Over the next two years the family worked tirelessly on new ideas and four more fruit liqueurs were added to the Black Shuck range.

During 2013 they once again enlisted the help of family and friends as they began work on a recipe for Black Shuck Gin. The family have always taken inspiration from the stunning North Norfolk Coast and the recipe for the Gin was no exception. It took over two years of recipe development before Patrick and Sarah were completely happy with the results. Those who have tried Black Shuck Gin, since its launch in December 2015, agree it was time well spent.

Every year the family attend numerous festivals, tastings and fares across Norfolk.  It’s an important way for them to gather feedback directly from their customers. Additionally, the family has always been keen to support local organisations and charities, which includes every year at the Wells Carnival.  Furthermore they are proud to sponsor Fakenham netball team ‘Norfolk Sloes’ and Hindringham Football Club.

As for the future….. well this is a family that doesn’t stand still so watch this space.

You can get your hand on a delicious bottle of The Black Shuck Ignite Gin by visiting Beers of Europe which is based at Garage Lane, Setchey, Norfolk PE33 0BE which is open 7 days a week, or you can order online.