The balloon basket rose smoothly, rapidly, through the early-evening summer air over Bury St Edmunds, I shouted over to pilot Ben Pettitt, “So where do we go?” He answered with great freedom of spirit, “ Where the wind takes us .” But then I got the twinkle in his eye: this freedom was part of the spirit of ballooning. Not that there was much time to fuss about such matters, certainly for Ben, as he handled the burners and we all watched our loved ones disappear into dots on the ground below. 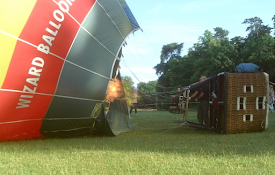 Still third time lucky and finally we got the green light and headed to the Nowton Park launch site near Bury on a Saturday, parking next to a children’s playground, to Pippa’s great delight. Where was the balloon? We just walked up past some tennis courts and there was the team with balloon already laid out on 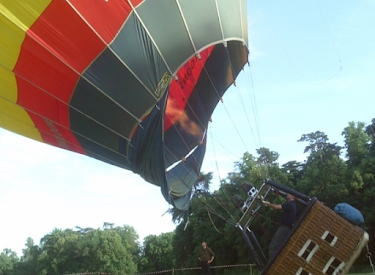 Ben told me later he’d been into ballooning from the age of 19 when he went on his first flight. It all seems as free as the air but obviously, there are rigid Civil Aviation Authority regulations regarding getting your pilot licence, especially for commercial flights. But by 2002 Ben was up and running, first taking a Wizard Balloons franchise in Cambridge, then buying out his licensee in Suffolk. Now he flies from Bury, The Oaksmere on the Norfolk/Suffolk border near Diss and two sites in Cambridgeshire with, ideally, about ten flights a month, for six months of the year.  In reality, Ben manages about 50 flights a year.

On arrival Ben, who is an experienced pilot gave us safety instructions, how to get into the basket and how to brace for landing. The order to get in the basket following ‘cold air inflation’ then hot filling was quite sudden and exciting: we all clambered in and were off.

“Flying in the Fens is pretty challenging,” said Ben. “Especially before harvest time – nowhere to land!” The occasion for this comment was Ben had descended right until we skimmed a field of wheat which was an amazing sensation. I’d thought that was it: landing time but then just as one of my fellow passengers only half-joked, “Won’t the farmer get a bit irate?” we ascended with a blast from the burners and were once again flying over farms, livery smallholdings and horses and village scenes. Going down and close like that, flying over the harvest then rising was unforgettable – my best part of the flight. 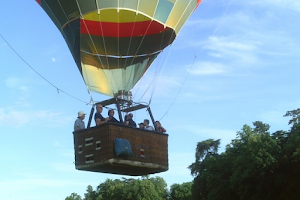 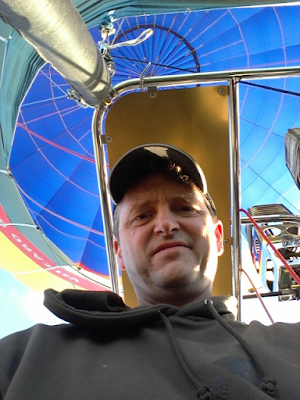 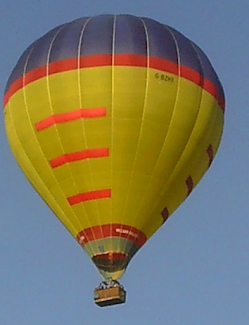 Visibility was good, and we could see the Norfolk, and to the south, Suffolk coastlines clearly defined on the horizon. Sizewell power station, for example, the docks of Felixstowe and Harwich in the distance. Turning round through 180 degrees, there was Ely cathedral – the Isle of Ely just a bump on the horizon.

By now we were flying at 1,000 feet in our basket – a reassuringly sturdy and old-fashioned wicker affair – which with the balloon and burners weighs 568 kilos. Fully loaded the basket and all of us weighs 1.5 tons.

Finally, after several ground miles covered and an hour in the air, that all-important landing – we had a ‘false start’, to slightly mix metaphors, and had to rise up again as we were too close to a line of trees, heading for a patch of rough ground on a farm where, amazingly, Ben had landed three years previously.

And it was a very gentle bump, landing at just 2mph.

As we came to rest there was a peaceful period as we waited for the ground crew to arrive in the Land Rover. (We had seen them earlier winding through country lanes down below but they were clearly talking with the farmer for a period!) But although peaceful it was also busy as we all helped out with deflating the balloon then folding it and eventually stowing it on the trailer. In this regard ballooning is a team sport and there is good camaraderie.

Finally, a balloon flight really is a special thing to do. Our basket contained three or four couples and it was also clearly a romantic event – a really good time to pause and enjoy that anniversary or similar moment. Certainly, it’s a perfect excursion, exciting, yes, but also very peaceful. Hard to put into words, in fact: just try it!
You can contact Wizard Balloons HERE to book your experience! Telephone: 01359 233622