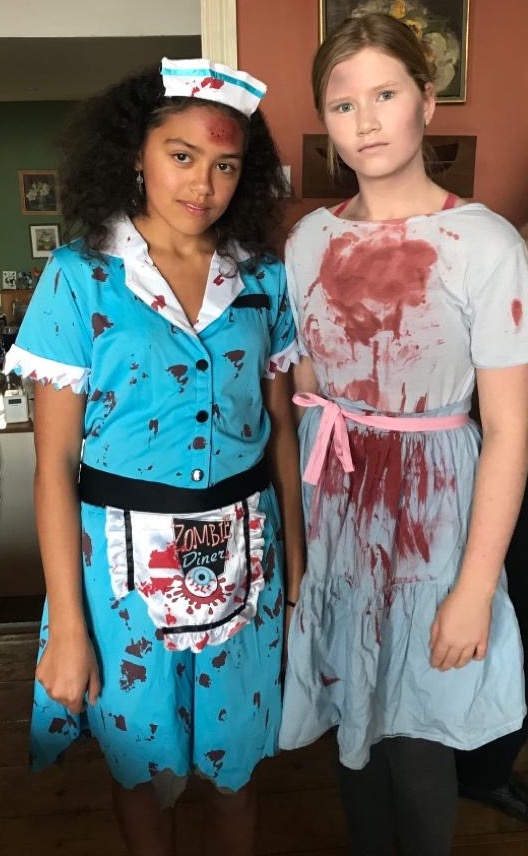 “Well done, you have been brave enough to buy tickets to Scaresville 2019: the best site for a fright night this Halloween.”

This was the message that greeted EOE’s approach to what turned out to be a frighteningly good and ‘real’ experience.

The spookily historic setting of one of Suffolk’s most historic and beautiful villages, Long Melford, is the appropriate background to this scary extravaganza.

It is fair to say we drove north through the village to Kentwell Hall – a Tudor country house and rare breeds farm but all of this was hidden by the gathering gloom of the 31 October darkness.

Yes we were privileged to be there on Halloween itself – however the first signs were not too scary.

A cheerful car park attendant in his fluo gilet directed us to a damp corner of a field which held no fear for our 4WD Landrover, at least.

Then, we met up with our family group and my daughter, Pippa, aged 12, was so pleased to see her teenage cousins, Olivia and Hazel, and their dad – my brother – Bill, fresh from a Stansted flight from the Channel Islands.

So far so good.

Everyone had questions, and they were soon answered: After all, where can you purchase a ticket to go and stand in a queue in the dark and be shouted at by a masked ghoul (a real person) who shouts frighteningly in your face?

Where can you wander in a pitch black maze, being pressed into dead ends by your co-suffering peers behind you and end up doubling back while bumping into a woman dressed as a banshee and an Orc which looks like its just wandered off the set of Lord of the Rings making threatening grimaces inches from your face?

I mean why would you want to do this? On October 31, 2019. Not Brexit this, but something far worse – a terrifying ordeal in the woods!

This extravaganza set in the woods north of Long Melford, Suffolk was something really special. It was big in scope, seriously large. There were large numbers of real support artistes, and I tell you the acting involved was really impressive. In a mixture of interior and exterior sets (they really were like a film set, or perhaps like an art installation) you were cajoled, terrified and intrigued by a huge range of horror-antics.

Sometimes you were shouted at, sometimes weirded out (there was a young man running around wailing in a muddy wedding dress – fair enough!) and some of the characters just sat in a corner, moaning and rocking.

It was very realistic. Another memorable episode was the church. A demonic ‘pastor’ invited us in, we knelt on the ‘altar rail’ and the next thing music and son et lumiere effects started and a (real) young woman (a witch basically) came bursting out of the altar and swinging around our heads on a trapeze. Shocking and actually brilliant to experience. 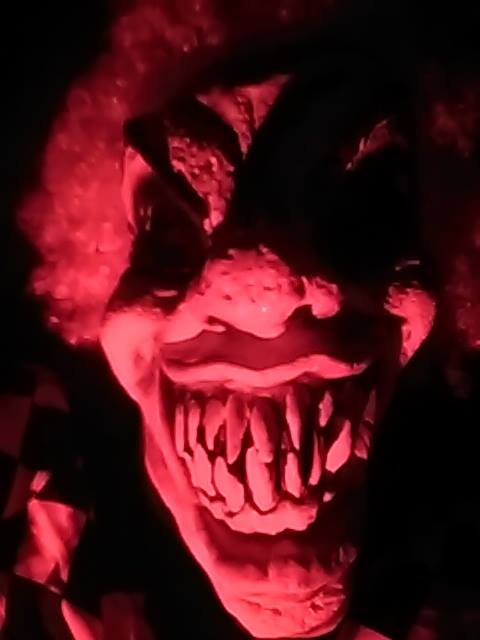 Only right at the end did things go a little awry. After a spooky dry-ice room with the eery ‘Tiptoe through the Tulips’ soundtrack, you suddenly hear the sound of (real, petrol) chainsaws being gunned up, the doors opened and some older lads were cavorting around making swings with their chainsaws (which obviously had the sharp bits of the chains removed, it has to be said). And this was finally too much for Hazel, 13. She was shedding a tear or two of shock but suddenly that was it and it was all over. We were in a (very nice) cafe at the end eating very good cheesey chips and drinking hot chocolate and hot coffee and we all agreed the event was a big success. Hazel’s face looked white – and it wasn’t just the makeup she had applied for her ‘shot girl’ costume.

I for one will be back next year and I’d finally like to say I have the utmost respect for the ‘actors’ who were so committed to their roles and put on a proper scary show which was the most exhilarating thing I’ve done for a long time: at totally unique experience.