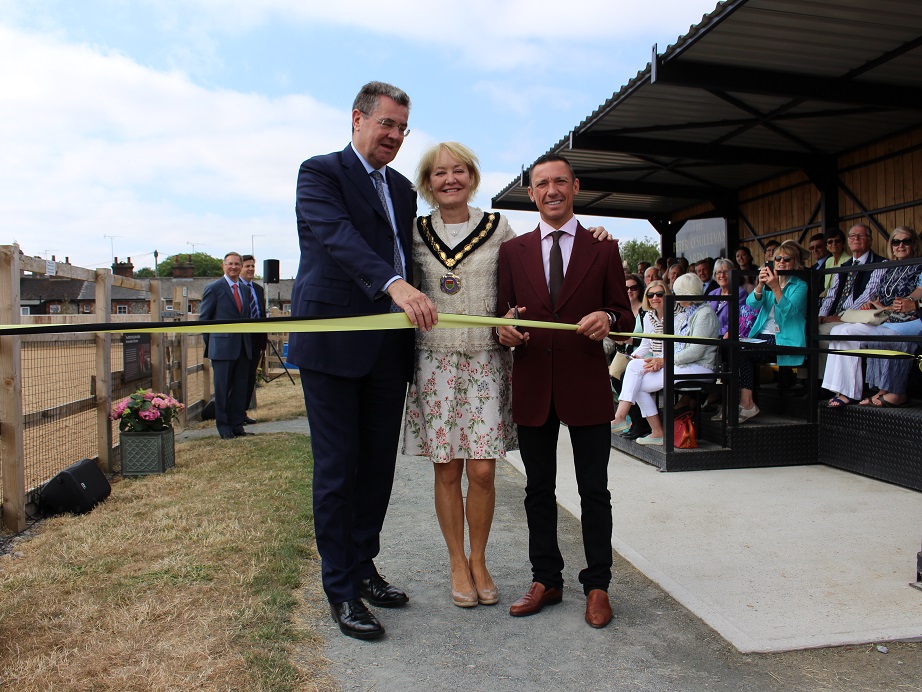 Frankie Dettori was on-hand on Friday morning to cut the ribbon to officially open the Peter O’Sullevan Arena Viewing Stand at Palace House in front of a host of equine stars including RoR residents, Purple Moon, Our Vic, Starluck and Sire de Grugy along with a guest appearance from Newmarket’s most successful National Hunt horse, Kalashnikov.

The newly constructed Viewing Stand which seats 63 individuals with disabled access viewing, complements the extensive all-weather Arena which opened back in November 2016. The state-of-the-art arena is the hub of all equine related activity every day with two demonstrations from former racehorses that are stabled on site as part of the Retraining of Racehorse charity amounting to over 1,000 displays since opening.

The Peter O’Sullevan Arena has been funded by the generosity of the Sir Peter O’Sullevan Charitable Trust through the Home of Horseracing Trust and allows the RoR to give visitors an insight into the process of retraining a racehorse and showcase the skills they can go on to develop once their racing days are over.

Frankie Dettori said: “It’s a great place here at Palace House and so brilliant that this Arena is used on a daily basis to demonstrate the work of the Retraining of Racehorses charity. My kids have used it in the past for show jumping clinics and pony club events. Seeing all the equine stars this morning was fantastic and Sir Peter would love it.”

Peter Jensen, Chairman of the Home of Horseracing Trust added: “It was fantastic we were able to demonstrate the purpose of the new Viewing Stand this morning with a parade of equine stars in front of a big audience. We are incredibly grateful to the Sir Peter O’Sullevan Charitable Trust for their generosity in providing the necessary funding for both the Arena and Viewing Stand.”

Nigel Payne, on behalf of the Sir Peter O’Sullevan Charitable Trust said: “Sir Peter would be immensely proud of the both the Arena and the new Viewing Stand which is dedicated to the Welfare of the Horse. We are very proud to have supported such a worthwhile project and it is the perfect way to perpetuate his name in Newmarket – the Home of Horseracing.”

Chris Garibaldi, Director of the National Heritage Centre for Horseracing and Sporting Art added: “The Peter O’Sullevan arena is the hub of equine activity every day to demonstrate the valuable work of the Retraining of Racehorse charity. We are so grateful for the generosity of the Sir Peter O’Sullevan Charitable Trust.