‘Keep your eye on a focus point, use minimal movement.’ Easing back on the rpm which is actually pressure, the R44 lifted up. We were airborne and taking my first trial lesson in an R44 helicopter and, despite the reality of the situation – super-experienced pilot Captain Philip Speechley holding the other side of the bar control – I was actually flying. Not wanting to sound too ‘adrenaline-junkie’, it was a big feeling – a great rush, a proper buzz.

This was something I had always wanted to do – what mankind has always wanted to do – flying, and with controls and slight, one could say minuscule movements of my right hand, controlling that flight.We glided at speeds of 90mph at a low level over the grassland surrounding Elstree Aerodrome and climbed smoothly. With a nice line in British understatement, Phil said via the comms system: ‘It’s the only way to travel.’ Fly like a bird, it can’t be bad. It wasn’t. 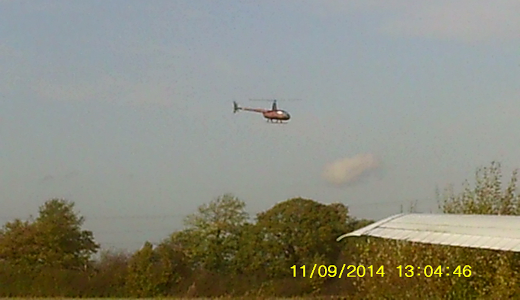 Based at London Elstree Aerodrome, Flying Pig Helicopters specialise in the helicopter experience but also offer a solid programme of return fights, a variety of trial lessons and experiences and for those learning to fly themselves, a PPL training programme. This offers anything from single lessons which for 60 minutes, rotors turning, cost £489 (R22) to £599 on an R44.

Block lessons and a pre-paid entire licence can be purchased (think a minimum 46 hours’ flying time but more normally, 60 hours) but back to the experience and this was well organised, professional and comfortable from our arrival at Flying Pig House.

Up for my trial lesson in a Robinson R44 helicopter, I was given time to settle into the comfortable lounge and was soon being introduced to Captain Paul White by attentive and professional staff. Paul explained the session and it being Remembrance Sunday the timings of our flight had been altered to respect the two-minute silence. Next, I talked to my pilot and tutor, Philip ‘please call me Phil’ Speechley and it turned out that parallel to his considerable flying experience was an uncanny knack with the office hot drinks machine as he sorted me with a latte and my wife and daughter with much-appreciated hot chocolates.

At every point, you felt the Flying Pigs team were attentive and clearly used to dealing with an alpha clientele and relaxed at the same time. So we were ushered into a side lounge where we viewed the firm’s introductory film and run-down on safety protocols.
There followed a photo session near the dual runways and hell-pads and I couldn’t help noticing some sensational cars parked up including a big black Jaguar that looked the business in that high-octane setting.

Pre-flight safety procedures followed and before long we took off as Chloe and Pippa waved to me below as they enjoyed a woodland walk down the nearby bridleway and a chance for puppy Lucky to stretch his legs. There were four of us in the R44 and the three of us received our trial lesson one at a time. As I was up first, it was a pleasure then to be part of the following lessons, literally flying as a passenger, but enjoying reliving Phil’s instructions and the impact of flying on those next up in the hot seat. For a bunch of guys who’d never met, even in that short space of time the camaraderie was good and the trust element strong, but above all in Phil’s capable hands.

Back to the flight and I looked down below and we were directly over the M1 motorway. Something told me it was bad practice, while actually flying an aircraft yourself, to focus on individual cars and lorries below, even for a nano-second, but I couldn’t resist, before we banked to the right and another fascinating detail leapt out from the ground below, a horse doing dressage in an arena in a livery yard below, before we swung round across green fields and woods in a big loop back towards our aerodrome landing strip. 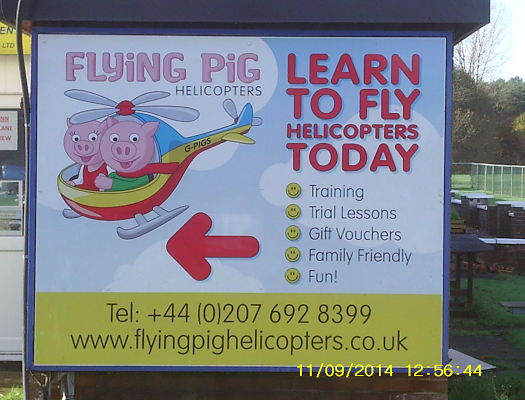 There followed a landing then a take-off. Yes, you are really flying at these key moments, as at others through your flight. And the slight movements of the controls allow you to ‘feel’ your way to being airborne, which is to make it sound more delicate than it is because when you start to bank or shift you can really feel it, so you keep your eye in on the fixed point – in our case an electricity pylon on the near-horizon.

The whole experience was exceptional, really fulfilling and loaded, afterwards, with a sense of achievement. It’s definitely a special way to confront your flying obsession and give you hands-on, been-there-done-that experience that will never leave you and which you can build on, should you wish, by talking with Paul and his assistants after the flight.