EXCLUSIVE – Reviews of All noise and light

Proactive, forward looking and born out of the maelstrom of the UK dance scene, duo Gorgon City hit the UEA Senior Common Room with a single (‘Smile’) to promote and UK dates ahead.

Playing at the University of East Anglia also marked an emotional link to Norwich for the band’s drummer (we met at the bar beforehand his schooldays friend Hannah Wild, now chief seamstress working with wedding shops, running her own business in Norwich). The fact he was also celebrating his 30th birthday may have accounted for keeping their expectant audience waiting.

A dual front – woman and man belted out tracks like Unmissable, Take it easy and with an energetic  light show heavy on strobe effects there was much to Smile about.

Gorgon City’s Kye Gibbon and Matt Robson-Scott were formerly dance music DJs in Foamo and RackNRuin and are with the big hitting Black Butter Records.

The tour comes after an impressive two years spent playing non-stop countless live shows and DJ sets across the globe.

Styled as ‘skilled navigators of the flowing currents of the 21st century dance scene’ which by its nature is cult-ish in draw, Gorgon City now eye mainstream popularity.

“Because we each had a bit of reputation built up,” says Kye, “the first gigs we got were pretty big festival ones, and it’s just gone on from there.”

Song structures and beat-making are their fortes, with their knack of bringing out the best in collaborators.

Why the Gorgon sisters of Medusa? It was unclear but the snake haired beauty was a strong classical themed logo.

The gig was well attended and built nicely with some fine moves on stage to lead their student audience and it can be said that without being 100% engaged they were enjoying a noisy stab at danceland euphoria. 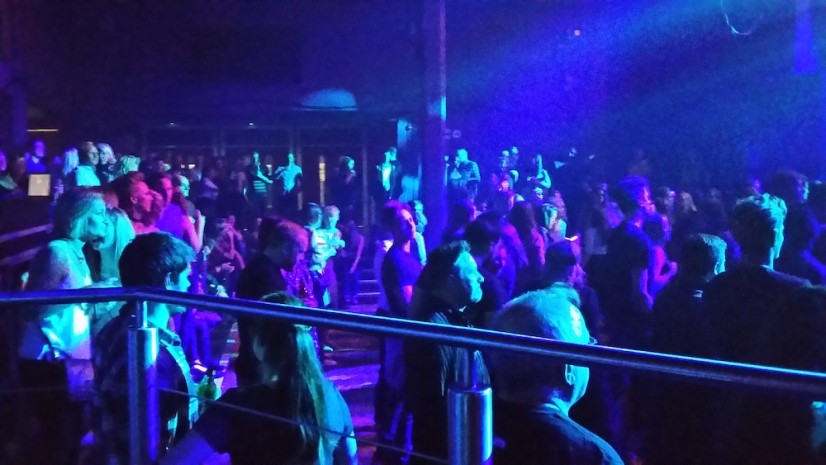