TO BE BROADCAST LIVE TO CINEMAS BY MORE2SCREEN ON 5th JULY 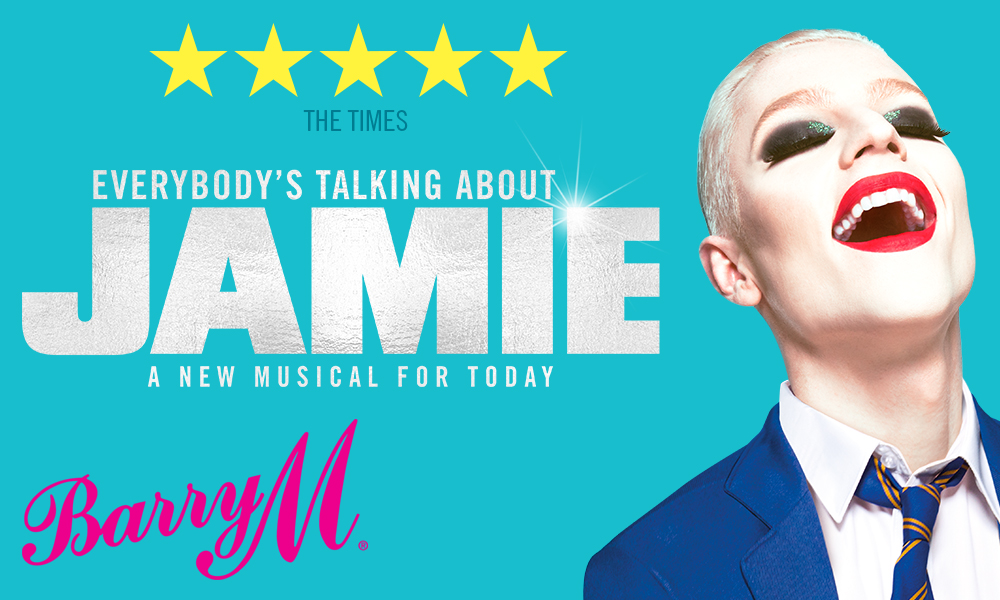 More2Screen has been appointed by Producer Nica Burns and Nimax Theatres to broadcast the award-winning 5-star hit musical Everybody’s Talking About Jamie live by satellite from the Apollo Theatre in London’s West End to cinemas across the UK, Ireland and selected European territories on Thursday 5 July 2018, followed by a worldwide recorded roll-out in the autumn.

Inspired by a true story, Winner of 3 WhatsOnStage Awards including Best New Musical, 3 UK Theatre Awards including Best New Musical and nominated for 5 Olivier Awards, this funny, fabulous, feel-good, musical sensation has been thrilling audiences and critics alike since it opened at the Sheffield Crucible in 2017, before transferring to Shaftesbury Avenue’s Apollo Theatre. Fresh and contemporary with an extraordinary mother and son relationship at its centre, Everybody’s Talking About Jamie celebrates acceptance and belonging, and how good life is when everybody is the best they can be.

Jamie New is sixteen and lives on a council estate in Sheffield. Jamie doesn’t quite fit in. Jamie is terrified about the future. He is going to be a sensation.  Supported by his brilliant loving mum and surrounded by his friends, Jamie overcomes prejudice, beats the bullies and steps out of the darkness, into the spotlight.

John McCrea, Josie Walker, Tamsin Carroll, Lucie Shorthouse and Phil Nichol lead a twenty-four strong company and an eight-piece band that will ‘sweep you away on a tide of mischief, warmth and exuberance’ (Financial Times). With ‘songs that have the wow factor’ (The Times) by lead singer-songwriter of The Feeling, Dan Gillespie Sells, and ‘hilarious’ book and lyrics ‘with delightful punch’ (Whatsonstage), by writer Tom MacRae, the musical is directed by Jonathan Butterell who was inspired to create Everybody’s Talking About Jamie after watching the Firecracker documentary film about the true and remarkable story of Jamie Campbell and his mother Margaret.

Christine Costello, CEO, More2Screen comments: “We are very proud to be appointed by Nica Burns and Nimax Theatres to bring this fabulously successful West End production to musical theatre fans around the UK and Ireland, and then to a global audience. Although there have been an ever-increasing number of successful theatre events at the cinema, the live broadcast of a commercial West End musical production remains a rare occurrence. The enthusiastic response from our cinema partners, and rush to programme the live broadcast of Everybody’s Talking About Jamie, demonstrates what a hot ticket this is for cinema audiences.”

Nica Burns, Producer and CEO Nimax Theatres, comments: “Everybody’s Talking About Jamie is an uplifting, contemporary musical for everyone.  Fantastic songs, a story that tugs at your heartstrings whilst being fun, funny and ultimately fabulous. Thank you to our audiences and the critics whose enthusiasm took us from Sheffield to the West End and continue to cheer us on every night. So come to your local cinema to join our live audiences for a great night out and to share “a little bit of glitter in the grey”. And of course – a round of applause to the wonderful More2Screen for partnering us to bring Jamie’s story to hundreds of screens nationally.”

Cinema tickets on sale from Thursday 12 April 2018 at www.jamieincinemas.com