Finnish composer Jan Sibelius held strong views about his country’s position under Russian dominance. Much of the Karelia region lay in Russia, but the fact that part of it was in Finland’s eastern tip (focused on Vyborg) was one of the reasons Sibelius accepted a commission to provide music for the students of Helsinki University in Vyborg. The Karelia Overture we are performing is the first movement of that music. Its sense of nationalistic pride is clear, although it stirred the audience at its first performance in 1893 rather too much. As Sibelius noted later “You couldn’t hear a single note of the music – everyone was on their feet cheering and clapping“.

Tchaikovsky’s Violin Concerto is one of the best-known violin concertos in the repertoire. Inspired by the discovery of Lalo’s Symphony Espagnole, Tchaikovsky immediately set to work on his own concerto, completing the sketches for it in only eleven days. The work is filled with the lyrical suggestions of Slav and Russion folksongs that so often found their way into his ballet works.
To perform the concerto, we are delighted to welcome back our very talented soloist, Zoë Beyers, who performed the Lalo for us in 2019. We look forward to what promises to be a stunning interpretation of the Tchaikovsky.

We follow the Concerto with a work by Mahler, Blumine. Originally included as the second movement of his first Symphony, it was removed after only a few performances. The reason for this remains unclear. There were some negative comments in the press of the time, but there was also a similarity with the last movement of Brahms first Symphony, written ten years earlier, which could have laid him open to accusations of plagiarism. Then again, it has strong echoes of a work by a colleague, Hans Rott who died while Mahler was composing his Symphony. Perhaps he included the movement as a homage to his friend, and then thought better of it? The work was then lost for many years, and only rediscovered in 1966. The first modern performance being at the Aldeburgh Festival with Benjamin Britten conducting, the following year.

Our final work of the evening is Shostakovich’s Symphony No.9. Premiered in 1945 it should have been a glorious celebration as the Soviet army pushed into Germany. But in the event its neo-classical nature and relative brevity did not live up to the expectations of the Russian regime. After the premiere it was not performed again until after Stalin’s death.
Conductor Vasily Petrenko said of this work: One of Stalin’s favourite dances, the Dance of the Bones, is used in the last movement. What was Shostakovich saying? The truth: that five million people died after the war of starvation, because of chaos, corruption and slow directives. People were being screwed again’ .
‘I’ve met a few people still alive who listened to all the first broadcasts of these war symphonies: they’ve told me how they were sitting in the kitchen listening to the Seventh, and what a powerful emotional effect it had on them; the Eighth was more challenging, but they understood it; after the Ninth they got up in silence and left the room. The message was so clear: we may have won the war, but the same guy is in charge’
Stirring music, and absolutely unmissable. 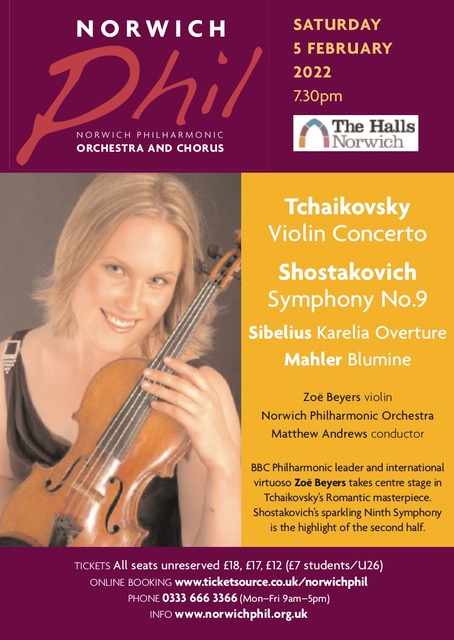 This event was uploaded by a guest event organiser