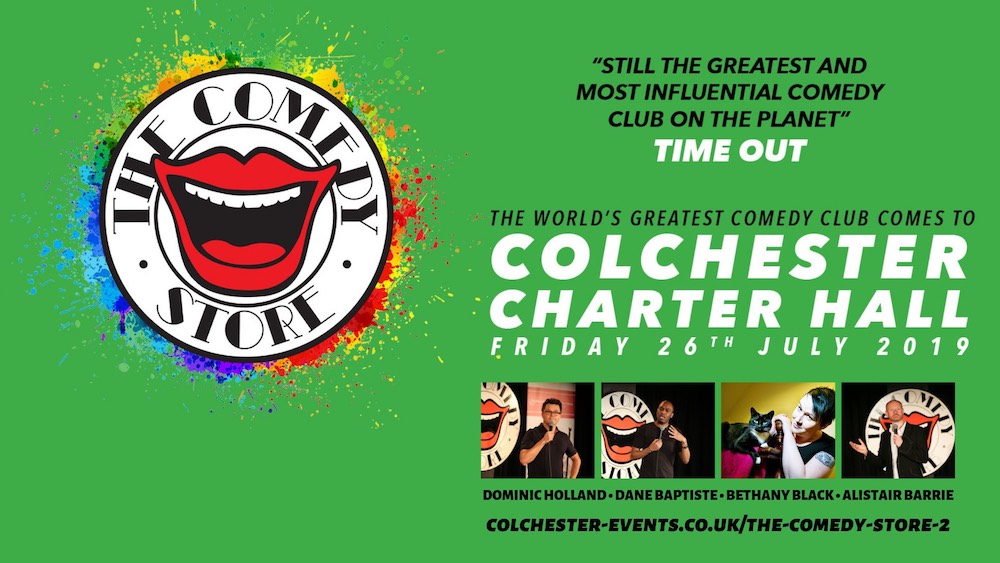 Comedy connoisseurs rejoice! Once again, Colchester Events Company is teaming up with London’s infamous Comedy Store to bring some of the hottest comedic talents in the UK to Charter Hall.

Taking place on 26 July, the show will present a star-studded line up of special guest comedians in a night guaranteed to keep audiences rolling in the aisles.

MC Alistair Barrie is amongst the most sought-after comedians on the international comedy circuit. Alistair has performed all over the UK, and across Europe, as well as further afield as Bahrain, Abu Dhabi, Hong Kong, Macau, Malta, Singapore, Indonesia, Kuala Lumpur, Afghanistan, and at the world’s highest gig on top of a mountain in France.

Barrie is also a key member of The Cutting Edge team at London’s Comedy Store. He has also made numerous TV appearances around the world.

Dominic Holland has been doing stand-up comedy since 1991 and has become one of the most regarded comedians of his generation, playing regularly at The Comedy Store and performing full length at theatres all over the country. In addition, Dominic has made numerous guest appearances on such television shows as Have I Got News For You, The Clive James Show, The Brian Conley Show, The Des O’Connor Show, The Stand Up Show, Edinburgh Nights, Best of Edinburgh, The Royal Variety Show, and Never Mind the Buzzcocks.

Bethany Black is a stand-up comedian from Chorley in Lancashire. Described as “Britain’s only Goth, lesbian, transsexual comedian”, she is known for performing black comedy and dealing with controversial subjects!

Dane Baptiste – After the incredible success of his debut show Citizen Dane (which saw him nominated for Best Newcomer at both the Foster’s Comedy Awards at 2014’s Edinburgh Fringe Festival and again in 2015’s Chortle Awards), Dane has completed two sold-out runs at The Soho Theatre (with additional dates added due to phenomenal demand), written and starred in his own sitcom for the BBC and performed at the Melbourne Comedy Festival.

Cllr Theresa Higgins, Colchester Borough Council Portfolio Holder for Commercial Services, said: “The Comedy Store is a great addition to this year’s excellent line-up of shows at Charter Hall and is certain to draw a great crowd as usual.”

The Comedy Store takes place at Charter Hall, Colchester, on the 20 October 2017. Doors open at 7pm. The event is 18+ and I.D. may be required. Tickets: £17 plus £2.50 booking fee. A fully stocked bar will be available on the night serving a selection of drinks and snacks.

To find out more and to book tickets visit: