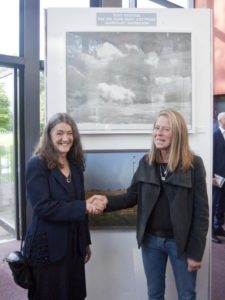 One of the east of England’s top art prizes, the Holt Festival-Sir John Hurt Art Prize, is now inviting entries for the 2018 exhibition. The cash prize has been increased to £1,750 and the winning entry will also be exhibited at the prestigious Sainsbury Centre for Visual Arts in Norwich.

The Sir John Hurt Art Prize is open to artists everywhere and in previous years there have been entries from all over the UK. All types of visual art are welcome.

The judges will select a shortlist of 25-30 which will be listed on the festival website and exhibited at the Auden Theatre, Holt between 21-29 July with the winner announced at a private view on the evening of Sunday 22 July. The exhibition is part of the Holt Festival Art Trail that also takes in many other galleries and exhibition spaces around the town.

Festival organisers have also announced the first Holt Festival Open Studios, a great opportunity for artists within 15 miles of Holt to invite the public to their studios. It will run from 21-23 July between 10am & 5pm and a map detailing participating artists will be available to download from www.holtfestival.org . Open Studios are FREE to visit and offer people the chance to meet artists in their own studios to talk about their work and buy original artworks directly from their creators.

Holt Festival Fine Art Director James Glennie commented ‘The Holt Festival-Sir John Hurt Art Prize and Open Studios are great opportunities for both emerging and established artists. The Prize becomes better known each year with entries coming from further afield and the quality getting better each time, making the new team of distinguished judges job ever more difficult. There are so many talented artists in the area and we hope that the Open Studios will enable many of them to reach new audiences as well as giving the art loving public the opportunity to meet and learn about our local artists’.

The closing date for both Prize entries and Open Studios applications is midnight Sunday 17th June 2018.

This year’s Art Prize judges are renowned painter and printmaker Eileen Cooper RA, modern and contemporary British art specialist Robert Upstone, who was a senior Tate curator for 23 years, and Lady Anwen Hurt who has maintained a life-long interest in the visual arts and was married to actor/artist Sir John Hurt.

The 2018 Holt Festival runs from 21 – 29 July and has become acknowledged as the leading new festival in the county. The charming Norfolk Georgian country town comes alive for an exuberant week of international music, drama, visual art, dance, comedy and children’s shows. It recently announced its first highlights and the full programme will be revealed on 30 April.