The ENDELLION STRING QUARTET, ‘Resident Quartet’ at the University of Cambridge, will give its second concert in the 2016-17 season at West Road Concert Hall, 11 West Road, Cambridge CB3 9DP on Wednesday, 16 November (7.30 p.m.).

The Op.54 set suggests strongly that Haydn’s main focus when composing quartets had moved from the players to the audience. (Though this doesn’t make them any less fun to play!) Bartók’s fifth quartet ranges from the almost barbaric to some of the most yearningly beautiful music ever written. Op 127 is the most lyrical of Beethoven’s late quartets containing a set of variations which never fails to amaze with its breathtaking beauty and invention.

Attached is the season’s flyer for full information about all the concerts in the Series.

‘Captivates concertgoers with a remarkable rapport, playing to each other with a sense almost of discovery, communicating to the audience on a level of unusual intimacy’ – Guardian

‘There’s always a feeling when listening to the Endellion Quartet that you’re listening to the Urtext method of quartet playing. Maybe 35 years of playing together has brought a uniformity of thought and instinct to them as a group that allows them to play as a single entity’ – Gramophone Magazine

‘Almost 30 years after their landmark recordings for EMI, the Endellions revisit the three [Britten] quartets bringing greater depth, vigour and freshness. The youthful bite of the first, the operatic anguish and Purcellian warmth of the second, the other-worldly gravity of the third;  all captured with the tangible focus and technical command that comes with life-long championship of these works.  Beautiful recorded sound.’ – ‘Editor’s Choice’, Classical Music Magazine

‘The group’s contact with Britten’s idiom is unassailable … blended tone of the playing, a fondness for darker colourings and a responsiveness to a wide range of inventive and rapidly varying textures … the players’ agility and extroversion … the Andante calmo of No.1 is one of the most affecting one can expect to hear, with a real sense of communal breathing that allows a natural bloom and an expressive voice that lies halfway between desolation and consolation’ – The Strad

[HALF PRICE tickets (standard or OAP) for restricted view seats.]

Group discount: 20% off for groups of 10+ (plus free programmes for each group member)

The Endellion String Quartet is most grateful to Lark Insurance

for their sponsorship of this concert. 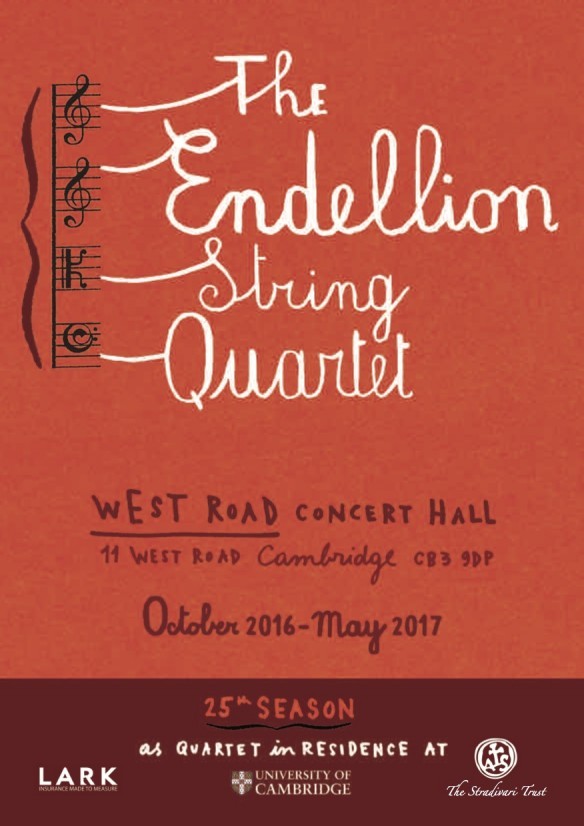 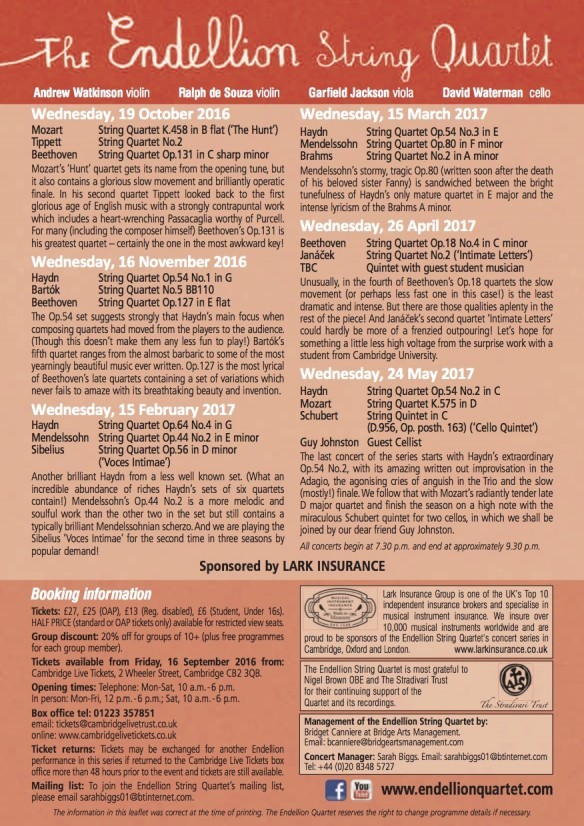