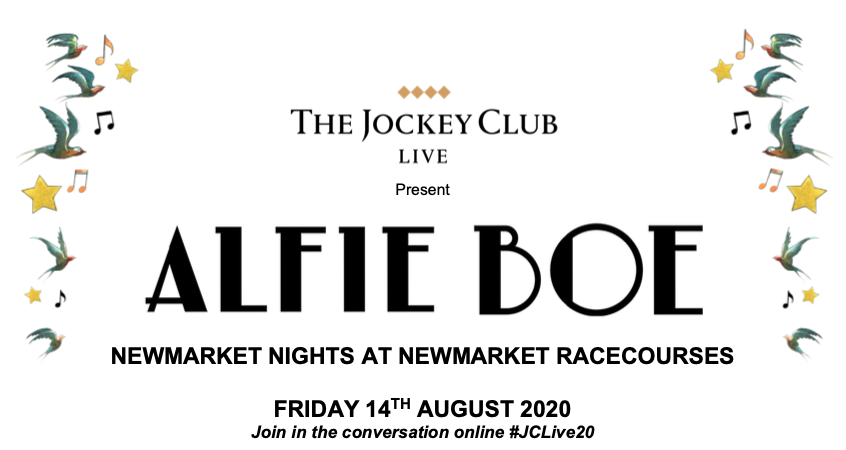 The Jockey Club Live are delighted to announce that ALFIE BOE will be making his Newmarket Nights debut on Friday 14th August 2020.

Ever since he exploded onto the music scene nearly 20 years ago, Alfie has racked up one extraordinary achievement after another. He has multiple Number 1 albums to his credit, while ‘Together’, ‘Together Again’ and ‘Back Together’ his collaborations with good friend Michael Ball, have sold over a million copies. Having performed in some of the world’s greatest classical venues, he also has the rare ability to bring together all sorts of music lovers. Not many artists can lay claim to having appeared in the West End theatre, Broadway with lead roles in Les Miserables, La Boheme (which earnt him a Tony award) and a spectacular orchestral version of the classic rock album Quadrophenia. He is a singer who transcends categories. “When I look at the crowd at my concerts,” he says, “I can see I’ve got Who fans, classical fans, musical theatre fans and jazz fans as well.”
Having completed a 16 week sold-out run returning to the role of Jean Valjean at the ‘All Star’ concert of Les Miserables, which streamed the final show live to cinemas making it a big office hit, Alfie will be headlining his own concert at Newmarket Nights, performing some of his favourite songs and most well known West End hits.
Sophie Able, General Manager of Newmarket Racecourses, said
‘We’re very excited to be welcoming Alfie Boe to the July Course on Friday 14th August. Alfie Boe has one of the most recognisable voices in musical theatre and we can’t wait to see him bring the magic of the West End to Newmarket.’
The Jockey Club Live are leading promoters on the UK live scene, delivering spectacular line-ups of some of the hottest chart talent and legendary household names to some of the world’s most famous racecourses. Summer Saturday Live and Newmarket Nights are a staple in the region’s social calendar and each year host tens of thousands of fans of live music. Past headliners have included Kylie, George Ezra and Little Mix.
The events are renowned for combining a fun filled evening at the races with a spectacular evening concert in the informal and relaxed open-air setting of the hallowed turf. Newmarket Nights won the ‘Best Event for Groups’ at the prestigious 2018 Group Leisure & Travel Awards.
The Jockey Club racecourses have world-class customer facilities, featuring an array of award-winning restaurants that cater for all tastes, from fine dining through to delicious bistro food. The Jockey Club’s racecourses welcome over 2million people a year for some of the UK’s biggest racing events so you can be sure a fantastic evening.
Tickets will be on sale at 8am on Friday 20th December via thejockeyclublive.co.uk, with a presale available to customers now. Tickets are priced starting at £30.24 (inclusive of transaction fees). All T&C’s are available on newmarket.thejockeyclub.co.uk. There will be hospitality packages available to suit all budgets.
Tickets for The Script (Friday 19th June), Bryan Ferry (Friday 26th June), Rick Astley (Friday 31st July), Jack Savoretti (Friday 7th August) and McFly (Summer Saturday Live, Saturday 29th August) are on sale now via thejockeyclublive.co.uk.
In addition to Newmarket, The Jockey Club Live will be hosting live concerts across Sandown Park, Market Rasen, Aintree, Haydock Park and Carlisle racecourses next summer.